Abbott: We dodged a bullet 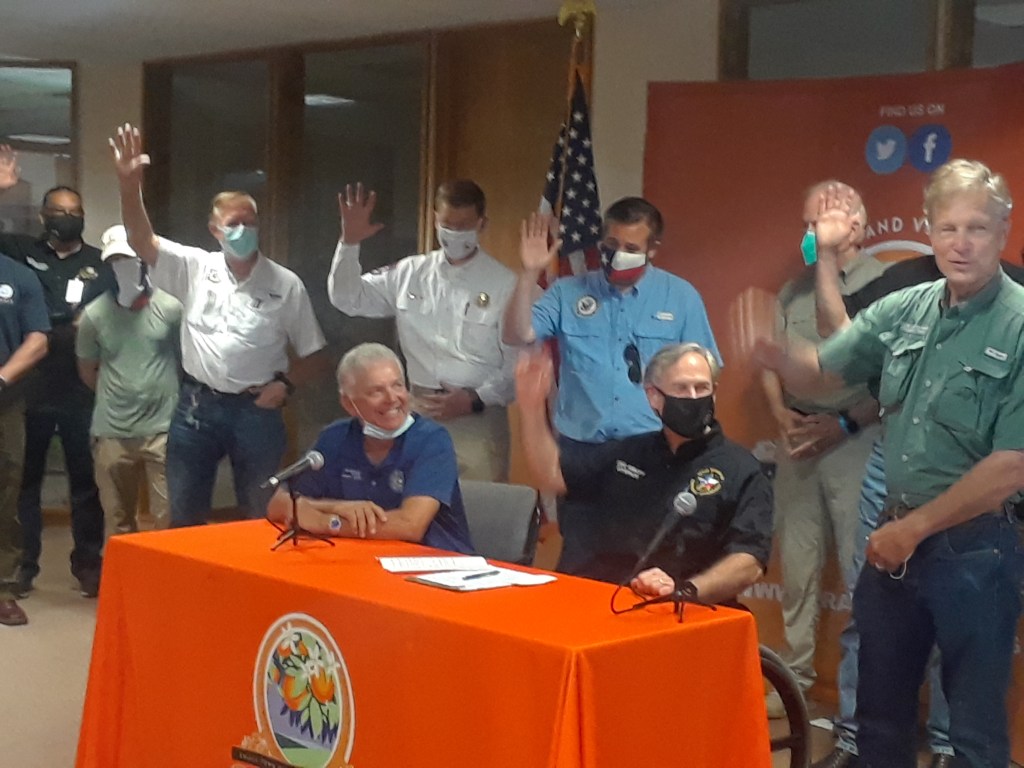 Abbott, along with national, state, regional and local officials briefed reporters on a range of subjects at Orange City Hall Thursday afternoon. One sentiment ran through the comments of all on hand: It could have been much worse.

“We were anticipating… a storm surge that could have easily exceeded ten feet. I was told earlier that the storm surge was about three feet,” Abbott said. “And that seven-foot differential means all the difference.”

The governor did note, however, that during his tour of Laura’s damage, the worst destruction he saw was in Orange.

Abbott and Orange County Judge John Gothia said that with the exception of one unconfirmed case in Sabine County, there have been no deaths reported so far in the wake of the storm.

Abbot went on to assure those with damaged property and businesses that officials are committed to helping them to rebuild. The effort is already in motion, said Abbott, who told President Trump that he had never seen a disaster response as quick as that of the administration and FEMA.

For those who evacuated, TxDOT confirmed Interstate-10 is open for travelers as of today. For those who left on transport provided by local agencies, officials said that once communities have the okay, the exact process used for leaving the region will be done in reverse.

Officials say that agencies made a coordinated effort to stop COVID-19 spread during the evacuation by housing families in hotel rooms, providing PPE and sanitizer and by testing those in congregant shelters.

Abbott said, “For the next 24-48 hours. We continue to assess if lives are at risk, then get to clearing roads and then restoring power.”

Finally, the governor urged Orange County residents to wait for the “all clear” from regional authorities before returning to assess damages.

“Earlier today, I met with Governor Abbott, Senators Cruz and Cornyn, and numerous other elected officials as well as senior representatives from FEMA, the U.S. Coast Guard, the Army Corps of Engineers, and the Texas Division of Emergency Management (TDEM) to discuss Hurricane Laura response efforts and the “Ike Dike” or the coastal storm surge mitigation project to help avoid flooding and prevent major hurricane damage in the future,” U.S. Congressman Brian Babin (TX-36) said after the press conference. “In the coming days, weeks, and months, I will continue to work with the Governor, my colleagues in Congress, and state and local officials to ensure that impacted TX-36 counties and residents have the resources necessary for a speedy recovery.

“I’ve also been in contact with my Louisiana counterpart, Congressman Clay Higgins, and will support our eastern neighbors however possible.”

Hurricane Laura made landfall in the middle of the night as a Category 4 hurricane. Tree damage was been reported in Jefferson, Hardin, and Orange counties.

Orange County has also reported structural damage. Recovery efforts are already underway in the areas hardest hit by Hurricane Laura. Several state agencies are in the affected area to provide search and rescue capabilities, if needed.

They are in communication with local leaders but there are no search and rescue requests at this time.

A number of medical resources were deployed ahead of the storm and remain in affected areas to assist in recovery efforts. Over 350 Emergency Medical Task Force Members are currently deployed, and over 144 hurricane evacuation missions have been conducted.