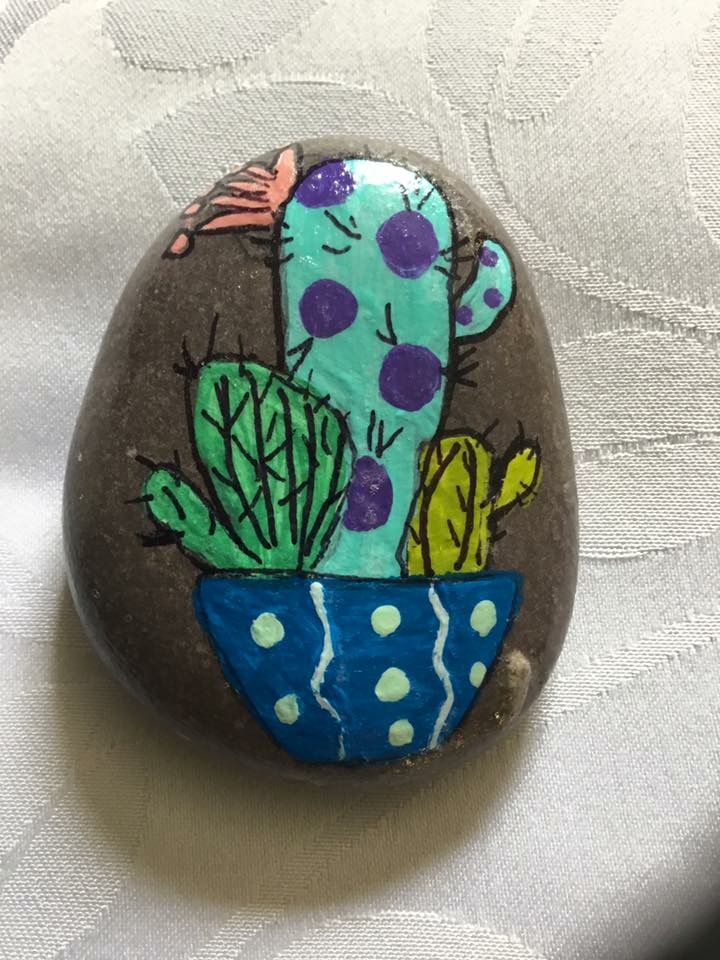 All of a sudden, there are painted rocks along my path.

This has been going on for a while, I guess, but I never saw them in my neighborhood. Now, however, someone has more time on their hands, or a desire to reach out, or has lost their mind in isolation—whatever the reason—and little painted stones are appearing everywhere.

When I saw the first one, I didn’t think much of it. I think it was a Star Trek logo (I won’t swear to that). It was black and gold and looked kind of space age. Then I saw a rainbow. Then it registered. “Oh. Someone is leaving painted rocks!”

Then I saw a watermelon and several flowers and a few inspirational sayings. When I got home, I googled it. Yup. People were painting rocks. It’s a thing.

One website reminded rock painters, “this activity is about gifting and not expecting to find a rock or get recognition when yours is found.”

I like that. You paint a rock, you never know what it will do, how many people will see it, where it will end up. Once it’s out of your hands, it has a life of its own.

Right now, there is someone out there who painted a small, rectangular rock with flowers in two shades of blue and a bright green center. It’s a very nice rock. I should know. I put it in my pocket, took it home, and I’m looking at it (and writing about it) right now. I’m guessing the person who painted it did not expect there would be a newspaper column written about it and that’s exactly why I like the idea so much.

Because I never know how what I do or say will affect another person. Social media has made it a lot easier to have a lot bigger effect on a lot more people in a lot less time. This is frequently not a good thing.

Yesterday, this was brought home to me when I made a less-than-complimentary comment about someone’s photo of biscuits and gravy.

I immediately regretted it. In no time flat, there was a spirited discussion about the merits of biscuits and gravy going on that I never intended. I did not want to be the Great Enemy of Biscuits and Gravy. I didn’t want to go to battle against all the Biscuit and Gravy Champions. I stood zero chance of ever persuading anyone that biscuits and gravy might not be the Very Best Thing in the Whole World and probably, as a result of my thoughtless comment, half a dozen folks were cooking up biscuits and gravy that night because they’d forgotten how much they liked them.

(Can we at least admit that biscuits and gravy are not the most photogenic food? Okay, never mind.)

So now I’m thinking, instead of trying to set anyone straight on biscuits and gravy ever again, I’m going to try to leave the equivalent of a painted rock. I try to say “hello” when I meet someone. I always compliment everyone’s dog because I figure no one can be told too many times they have a beautiful dog. (And, for the record, all dogs are beautiful.)

I try to leave behind something positive and try not to worry where my painted rock ends up. I’m going to hope that someone will find it—like I found this one—and think, “Wow! I really like two shades of blue with a bright green center!”

And I’m keeping my opinion on biscuits and gravy to myself.