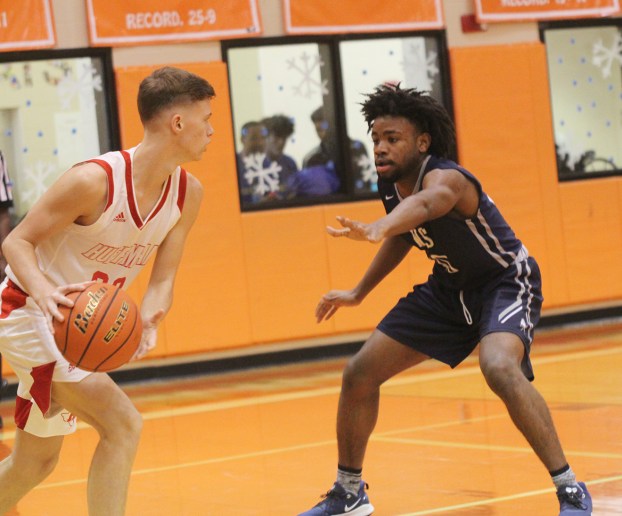 Van Wade/Orange Leader WO-S' Jalon Ross (10) defends against Huffman during the Tennison Tournament in Orangefield. The Mustangs went 4-1 in the tourney.

ORANGEFIELD – Great action at the Tennison Tournament at Orangefield High School wrapped up Saturday with some action-packed games.

On the boys’ side, the West Orange-Stark Mustangs held off the host Orangefield Bobcats 50-47. Both teams wrapped up the round robin tourney with 4-1 marks while Huffman was the champion with a perfect mark.

Meanwhile, on the girls’ side, the Class 6A West Brook Lady Bruins downed the host Lady Bobcats 50-33 in the Championship game.

In WO-S’ win over Orangefield, the Mustangs led the whole way and built an early double-digit lead after the quarter and led by double digits in the fourth before the Bobcats staged a late rally at the end.

Labarius Spraggins led the balanced Mustangs with 10 points and five rebounds. Bran Keller had eight points while Jalon Ross and Shemar Manaway had seven points apiece and Adrian Crochet-Hernandez added six for the Mustangs, Quincy Ledet had six rebounds for the Mustangs while Ross hauled down five.

WO-S finished with a 29-18 rebounding edge. WO-S committed 15 turnovers while the Bobcats had 12. Orangefield was 12-of-18 from the free-throw line while the Mustangs were 5-of-8.

Bryant and Wrinkle led the way with 13 points apiece while Bryce Bergeron had 11 points and four rebounds and DuBose had 10 points and five boards.

In the championship game, the bigger Lady Bruins flexed their muscles early on, getting out to a 15-8 lead on the Lady Bobcats. West Brook led 24-17 at the half but pulled away with a 15-4 spurt in the third quarter.

The LC-M Bears wrapped up play in the Hardin-Jefferson Tournament Saturday with a nice 48-46 overtime win over Needeville.

The LC-M Lady Bears played Carrenco of Louisiana on Friday and dropped a tight 29-28 decision.