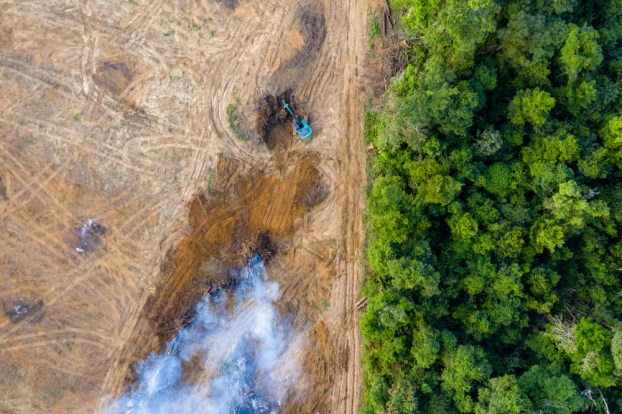 A section of rainforest is burned and cleared for commercial development. (Shutterstock)

While the world watches in horror as fires rage in the Amazon, activists are naming culprits.

“Put out the flames, we name your names — politicians, corporate vultures, you’re the ones we blame,” demonstrators chanted as they marched from the White House to the Brazilian Consulate on September 5.

The fires are no accident. Most have been set by agribusiness and mining interests hoping to make money off the land.

Much of the blame has fallen on Brazilian President Jair Bolsonaro, who has steadily rolled back indigenous land rights and environmental protections. But the multinational companies turning a profit off the destruction of the Amazon are also coming under more scrutiny.

Amazon Watch, a California-based organization that works with indigenous and environmental groups, issued a report earlier this year documenting dozens of companies that stand to make money off the catastrophe.

The report, titled Complicity in Destruction, highlights the main drivers of deforestation — from soy and beef commodity traders like Cargill and JBS to their financiers in North America and Europe, like BlackRock, Santander, and JP Morgan Chase.

Research from Mighty Earth, another group, identified the retailers most associated with those traders, including Costco, Walmart, and Ahold Delhaize, which owns Stop & Shop, Giant, and Food Lion.

“We encourage all Americans to use their economic power to put pressure on these companies to do the right thing,” said Todd Larsen of the advocacy group Green America. His organization is encouraging Americans to shop elsewhere and move their investments away from the companies responsible.

“The only reason these companies are able to keep burning down the forest year over year is because their customers keep paying them to do so,” Brazilian activist Bárbara Amaral told the crowd in D.C. She called on the public “to show up at the front doors of Cargill headquarters and yell that it’s time to protect the Amazon.”

Others emphasize that protecting the environment requires big structural changes to keep companies from making a quick buck off climate disaster in the first place.

“I’m tired of hearing about how individual actions can address climate change, such as buying metal straws versus plastic straws,” said Gabby Rosazza, a campaigner with the International Labor Rights Forum. “I’m more interested in learning about who is profiting from climate change.”

One of the companies profiting the most? BlackRock — the largest asset manager in the world.

A report released last month by Amazon Watch and Friends of the Earth found BlackRock to be a top shareholder in the 25 companies most involved in deforestation. BlackRock’s investment in these projects increased by more than $500 million between 2014 and 2018.

A pressure campaign is mounting against BlackRock to stop profiting off climate destruction of all stripes.

BlackRock “is complicit in the destruction of tropical forests and violation of human rights,” said Luiz Eloy Terena, legal counsel for the National Indigenous Organization of Brazil, during BlackRock’s annual shareholders meeting this year. “BlackRock must use its significant influence over [the companies it invests in] to signal that it will not tolerate policies that violate indigenous rights and damage the climate.”

The Amazon fires are a terrible tragedy. But the worst tragedy is that companies get to make millions attacking indigenous people and burning down vital ecosystems. The damage will stop not when the fires are put out, but only when it’s no longer profitable to set them.

Negin Owliaei co-edits Inequality.org. Kelsey Hawkins-Johnson is a Landau Fellow at the Institute for Policy Studies. This piece first ran at Inequality.org and was adapted for distribution by OtherWords.org.

Lyle Larson What organization operates with a $250 billion biennial budget, has a GDP of $1.6 trillion, but is only... read more