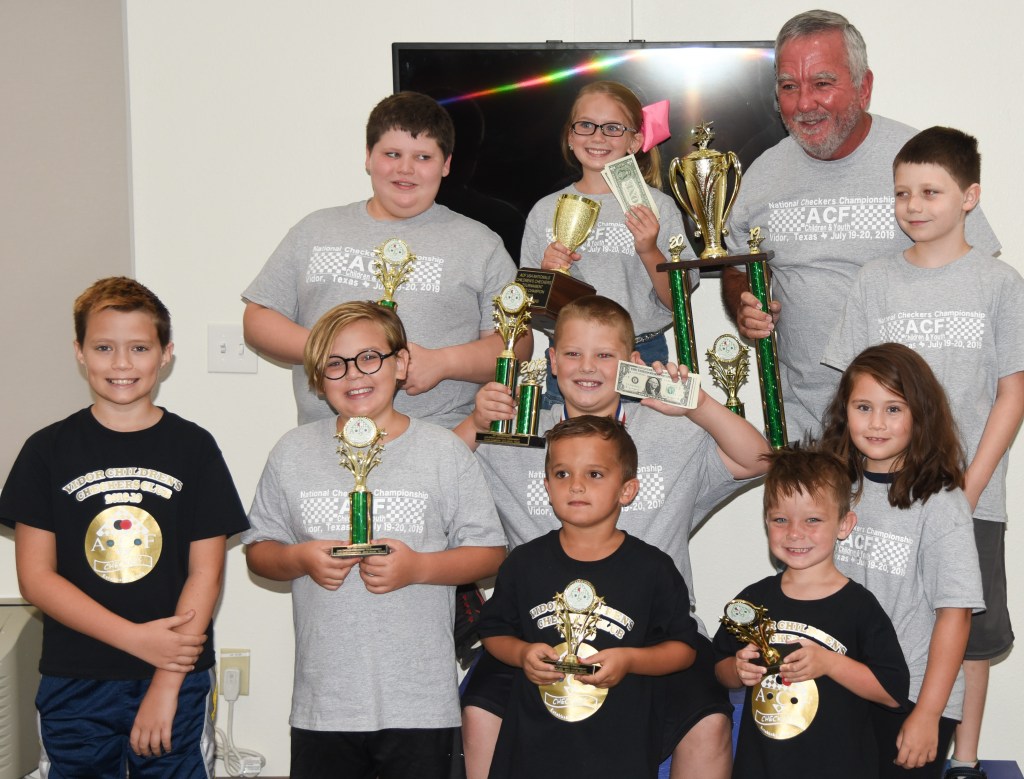 The Vidor Children Checker Club with their trophies.

Vidor held its’ inaugural USA National Children and Youth Checkers Championship this past week. The games have been played and the results are in the book.

Vidorians David Austin and Tessa Franks came away with sharing the title of the Texas Championship.  The two also tied for the second place National Title. 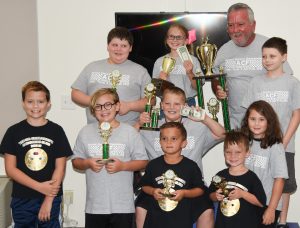 The Vidor Children Checker Club with their trophies.

Coach Franks said, “I am extremely proud of all of our children. It was an impressive performance in every category and in every game.  These children played two solid days of checkers.  That is a lot of concentration and a lot of checkers.  Tessa also claimed the National Girls Championship Title.”

Egor Kobelnikov, of Boca Raton, Florida claimed the National Title with a single game being the difference between the first and second place winners.

Egor played impressively throughout the day and was consistent in his strategy and his thinking. David Austin played Egor in the 5th round in one of the highlights of the day.  After losing the first game of the 2-game match, David came back and won the 2nd game with a brilliant move to finish the game.

Surprisingly, the tournament had four children in the seven and under bracket.  Twins, Tyler Franks, and Lucas Franks, each played some great games and showed very good sportsmanship.  The winner of this division was Alex Alai, from Florida.  Alex showed an excellent understanding of the game and made some very impressive moves. 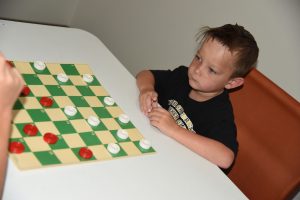 Lucas Franks, 6, during his match against Alex Alai of Florida.

Konstantin Voltelnikou and George Alai, both from Florida, tied for the Youth National Championship.  The pair played a tight game in every match with the lead going back and forth. These two have their eyes set on moving on up the ladder to becoming master players one day. Congratulations to both.

The tournament was certified by the American Checker Federation as the official National Championship.

ACF President, Alan Milhone, said, “This was a great event for our children and very well run.  Congratulations to all the winners!”

Coach Franks said, “I want to say thank you to all that made this possible. The city of Vidor supported this event and made it possible with their donation.  The parents of our team members went above and beyond.  The banquet on Friday night was perfect.  We had great food and great prizes for every child!  I am now looking forward to beginning our checkers club back up when school starts.  We hope to find many new members.  If interested, contact me on the Facebook page, VIDOR CHILDRENS CHECKERS CLUB.”

Congratulations to all of the participants.  Keep on jumping!