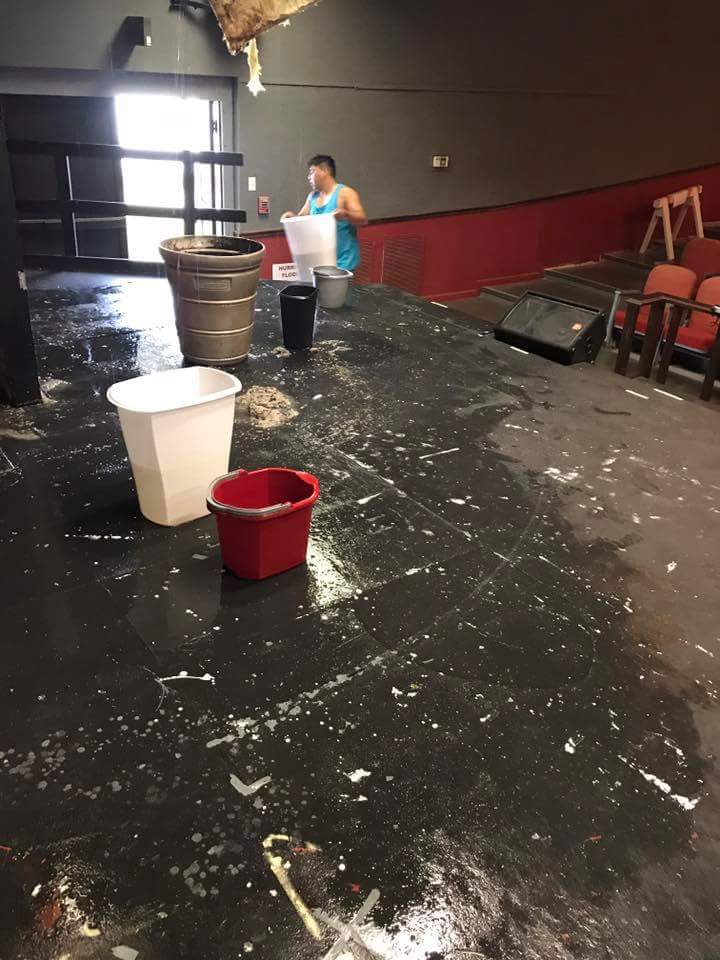 Courtesy photo Volunteers clean up as the Orange Community Players theater group looks for ways to raise much needed funds for a new roof.

The show must go on for OCP

While rains were flooding much of Orange County, Orange Community Players theater was experiencing the rain inside.

With a roof in need of repairs, the theater group was already in the process of getting quotes when the gully washer came down and created more damage.

While under temporary repairs, the show must go on.

The Young People’s Theatre Workshop will open with Heroes and Villains in The Infinity Goblet at 7:37 p.m. July 13, 14, and 15 and at 2:37 p.m. on July 16. Tickets for the event are $5. Reservations can be made at orangecommunityplayers.com

Orange Community Players was originally founded as “Town Theatre” in 1950. Productions were held at Helen Carr Junior High School and Anderson Elementary School. The production group has been housed at its current location since 1960.

Ticket income covers less than half the costs of a production.

With less than full houses at recent shows, the playhouse is in need of help from the community. A community it has been entertaining for 60 years.

Donations made to the organization are tax deductible. Donors of amounts greater than $10.00 will be listed in the programs.

Season tickets are on sale now and may be purchased online at http://orangecommunityplayers.com/

Many options are available:

Sponsorship Levels – All Sponsorship levels may request preferred seating and have their name listed in the program.

Partner Levels – Theater Partners have top billing at Orange Community Players. If you are interested in becoming a partner, please contact us at ocplayers@att.net.

*Name listed in all promotional materials

Questions concerning tickets may be directed to ocplayers@att.net or leave a message on the Box Office line at 409-882-9137

The 60th Season offers a variety of shows for everyone to enjoy from, The Best Little Whorehouse in Texas, Moon over Buffalo, The Savannah Sipping Society and The Pajama Game.

The Best Little Whorehouse in Texas directed by Codie Vasquez and assisted by Paul Burch set for September 2017, is based on the book by Larry L. King and Peter Masterson. The musical, is based on the true story of a legendary Texas brothel, which operated from the 1840s to 1973. Protected by a friendly sheriff and frequented by politicians, football teams, and others, the “Chicken Ranch” thrived in the small town of La Grange, Texas.

Moon  Over Buffalo, Directed by ‘Rico and Cydney Vásquez is by Ken Ludwig

In the madcap comedy tradition of Lend Me a Tenor, the hilarious Moon Over Buffalo centers on George and Charlotte Hay, fading stars of the 1950s. The show is scheduled for November 2017.

The Savannah Sipping Society is a Jones Hope Wooten Comedy directed by Dianna Hill. In this delightful, laugh-a-minute comedy, four unique Southern women, all needing to escape the sameness of their day-to-day routines, are drawn together by Fate-and an impromptu happy hour-and decide it’s high time to reclaim the enthusiasm for life they’ve lost through the years. The production will be on stage in February 2018.

The Pajama Game based on a book by George Abbott Richard Bissell with music and lyrics by Jerry Ross Richard Adler will be directed nu Doug Rogers in April 2018.

The Pajama Game was awarded the 1955 Tony for Best Musical and, over half of a century later, claimed the award for Best Revival of a Musical, proving that the story is truly timeless. With an energetic score, The Pajama Game is brimming with songs and dances that have become musical theatre standards, including “Steam Heat” and “Hernando’s Hideaway.”

Freedom Rally: Motivating others to become involved in the…