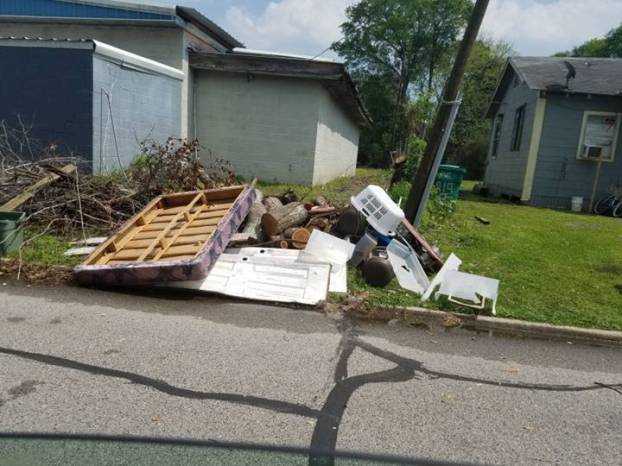 Courtesy photo Waste is piled, on March 25, in front of an unknown address in Orange. Citizens are asking the city to do more to curb the piles of waste, litter and unlawful dumping in the city.

A citizen wrote a letter to the city of Orange Council concerning trash throughout the city. One councilman, Larry Spears Jr. replied.

“I have researched some of the properties within one or two blocks of  residence (Historic District) where this is a common occurrence. I sent the owners (Landlords’)  a letter addressing my concerns.  I have only had one property owner (who resides in Louisiana) respond and over the past two months more trash has been set out in front of the property, so I know my concerns did not have an effect their behavior,” Backer wrote.

He also offered solutions for the issues.

“Charge properties not used as a primary resident for grappling truck pickup of trash –  If the landlord was fined or paid for the trash to be picked up when a tenant leaves ($500) then it makes the Landlord responsible for the trash pickup – not the citizens of Orange.

“Fees/Fines levied against the landlord of the property also sends a message to the landlord to better screen their tenants.

“As property values increase the landlord will either sell the property to an interested party or they will have to make improvements and upgrades to the property as more people want to move within the Historic District (demand vs supply).  Regardless of the outcome the tax payers of the City of Orange will NO LONGER be funding a cleanup along the curb of the property and supplementing the landlord’s responsibilities as a property owner,” Backer wrote.

Backer believes it starts when the City of Orange leads by encouraging investment in the downtown area and the Historic District is the first step in generating a buzz with incentives for homeownership.

“These areas give guests of our area a first impression of Orange and should be clean and well maintained,” Backer wrote. “I would like to see the City of Orange work with the City of Pinehurst and West Orange to help start an area initiative to keep our city’s clean.  This could be promoted by asking civic and service organizations for their help by asking them to adopt designated corridors our guest use to navigate our area.”

Councilmember Larry Spears Jr. replied in a letter stating, “I am scheduled to meet with several citizens about a recycling program they would like to see in Orange and as I stated in the candidate forum we definitely need to start a clean the city initiative! If we can’t manage what we have then how can we expect others to want to move here or do business!”

Spears said the city has a Code Enforcement officer.

“The city and citizens need to take ownership to keep the area clean,” Spears said. “We are the ones doing it to ourselves. I would like to see a Clean City Initiative.”

Spears pointed out there are signs all over the city for Adopt A Street.

“We need to get more people involved to see it reignite and to a grander scale,” Spears said. “If we don’t manage what we have, why can we expect others to want to be a part of it?”

The Orange Leader reached out to the city of Orange concerning the refuse.

The information requested was not immediately available, however, Director of Planning and Community Development Kelvin Knauf said he would have the information early in the week.

Sheriff Merritt is pleased to report that the Christus St. Elizabeth hospital staff has upgraded the condition of the inmate... read more