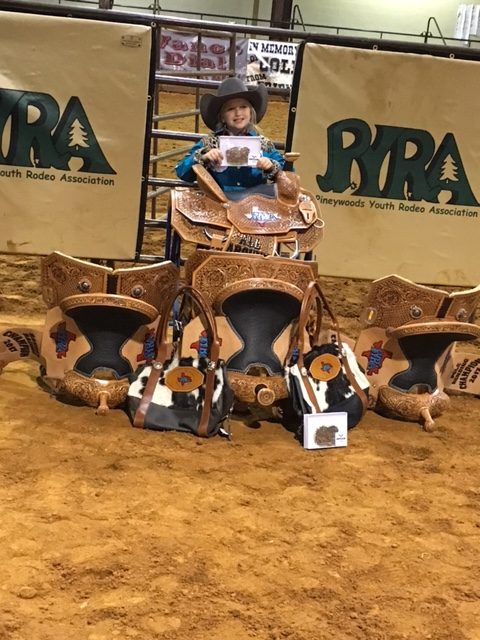 Steeley Rhea Franklin won four saddles at the Piney Woods Junior Rodeo Association. The finals were March 18-19 in Marshall, Texas.  Steeley won the nine and under barrels, poles, goat tying and the all around cowgirl in the nine and under age group. She was also fourth in the breakaway roping which was a huge accomplishment because the boys and girls in that age group rope together. Steeley is a whopping 50 pounds but her heart and try and larger than the state of Texas. Winning is in Steeleys jeans. Her mother, Shae Franklin, trains and rides barrel horses and was the State champion barrel racer in 1992 and the  College National Intercollegiate Champion in 1994. Her father, Shawn Franklin, was a five time NFR Qualifier in the calf roping. Her grandfather, Glen Franklin, was a past world champion as well. Dan Hooks is a familiar name to high school football in Texas. Hooks is her grandfather and possibly her biggest fan. Steeley has won six saddles since August plans to win many more. She will be competing in May at The Josey Junior World in May.