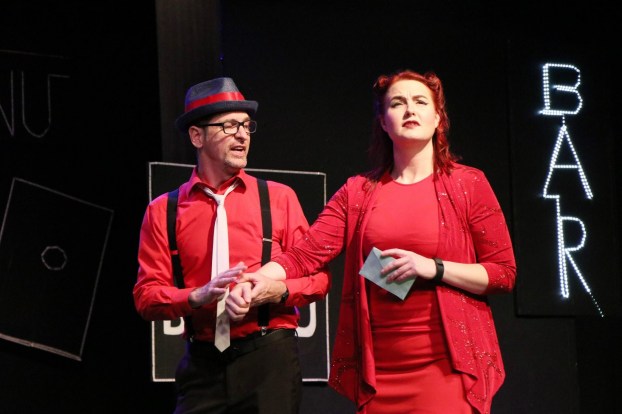 Guys and Dolls: a comedic hit

Audiences will enjoy the Orange Community Players’ latest musical comedy production, “Guys and Dolls”, more than “A Bushel and a Peck.” Two short stories of Damon Runyon, written in the 20’s and 30’s, form the basis of the story of some lovable hustlers and gamblers in New York City. The underbelly of the past in the Big Apple is made very real by these characters. The play opened in 1950, ran for 1200 performances, and won the Tony Award. Runyon’s wit is encapsulated and magnified in the book by Swerling and Burrows.

The plot consists of the romances of two oddball couples, one of which is a frustrated night club   performer named Adelaide who has been permanently engaged for 14 years to Nathan Detroit, a procrastinating crapshooter. The other couple is a big-time Bible-quoting gambler, Sky Masterson, and a mission worker, Sister Sarah Brown. That is all you really need to know about the plot.

Leading the well-cast ensemble is Chad Illa-Petersen as Sky. His acting chops are very apparent as he assumes his character so well that you forget sometimes that he is acting. His leading lady is his real-life wife, Leyni Illa-Petersen, who breathes life into the stiff, but later liberated missionary, Sarah. Good jobs, you two!

Stealing the show is Jona Gilchrist as Miss Adelaide. She has great stage presence and has her New York accent down pat. The audience has sympathy for her character as she sings and dances her way through the show. Her long time fiance, Nathan, portrayed by Jim Crain is adorably quirky.

Another standout performance is by Natasha Franks as the tough lady gambler, Big Julie, from Chicago. The best singing is done in “More I Cannot Wish You” by an assistant to Sister Sarah, Avette Abernathy, played by veteran Judy Smith. Bravo to you two!

The guys and dolls are too numerous to name but they brought the laughs, zest, and pizazz to the show. Who couldn’t love people named Nicely-Nicely Johnson, Benny Southstreet, Rusty Charlie, Harry the Horse, Charlie Keys, and the like? There is some live piano accompaniment provided by Dr. Chris Boehme. You will be treated to veteran Barry Foster singing “Sit Down, You’re Rocking the Boat” and will leave the theater humming “Luck Be a Lady Tonight.”

Kudos to the costumes! The show runs a little long, so be patient, sit back, laugh, and reminisce with the music.