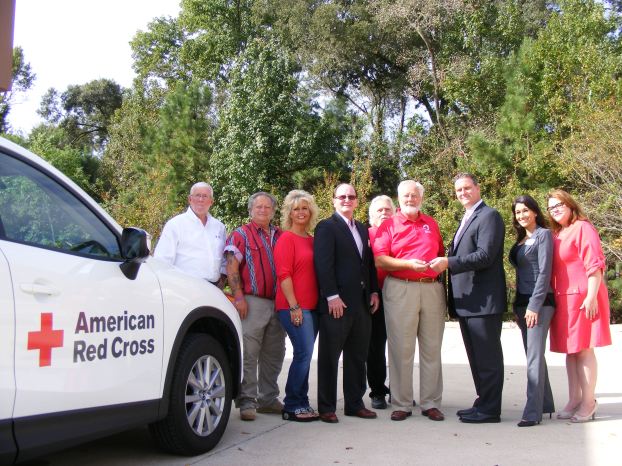 IRVINE, Calif. – Continuing its support of the Annual Disaster Giving Program (ADGP), today Mazda North American Operations (MNAO) announced the company’s largest in-kind vehicle donation, up from 15 last year, which will be granted to the American Red Cross. By donating 16 vehicles to the Red Cross, MNAO commits to an increase in its support as part of a long-standing partnership between MNAO and the Red Cross, including, on Tuesday, one Texas Gulf Coast Red Cross office in Orange.

“This is our year end event, the Mazda Drive for Good program, when we give back to the community,” Craig Salsberry, Region General Manager of Mazda North American Operations, said. “I travelled with the Red Cross during the recent Houston flooding and got to see how vast their network is and the work they do,” continued Salsberry.

Mazda was the first U.S. automaker to join the Red Cross Annual Disaster Giving Program. As a result of increasing its donations last year, Mazda became a $1-million ADGP member. By continuing to provide support and donations this year, Mazda remains the only automotive manufacturer to be a member at the million-dollar level. Through daily business activities, Mazda realized the unique ability to provide a needed resource—vehicles—ultimately delivering a mode of transportation for the daily business activities of so many other organizations. Donating these vehicles to the Red Cross provides Mazda with an opportunity to give back to communities in which it does business.

“Through the Mazda Drive for Good program, Mazda has the ability to work with strong non-profit partners throughout the United States—and the American Red Cross continues to provide an incredible partnership sharing similar values as ours,” said Robert Davis, senior vice president of U.S. operations at MNAO. “Partnerships such as these are important to the very being of who Mazda is as an organization.”

Each of the 16 vehicles will be donated and delivered to Mazda dealerships all over the country, reaching those American Red Cross offices that are most in need of new transportation. These vehicles will be used to deliver emergency supplies and services to families affected by disasters.

By Dawn Burleigh dawn.burleigh@orangeleader.com A first time Kick Ball Tournament hosted by #MakeItHappen on Sunday was a huge success. As... read more