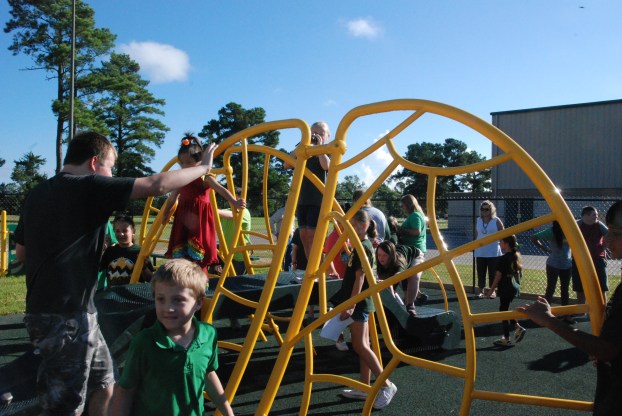 Dawn Burleigh/The Orange Leader Little Cypress Intermediate students enjoy the playground equipment at Stay and Play, an all-inclusive playground which started as a dream in 2012. The school celebrated, on Friday, the completion of Phase Two of the project. See more photos at http://photos.orangeleader.com/

Let’s go play were the words the students shouted as the ribbon was cut for Stage Two of the Stay and Play recreational area at Little Cypress Intermediate (LCI).

Prior to the enclosed area, the LIFE Skills students did not have an outside area to help with the development of gross motor skills. The area now provides a safe environment for the children.

Funds for each stage of the project were raised prior to construction.

Phase Two, with the installation of playground equipment for all levels of child development, the children can finally enjoy the hard work of LCI School Nurse Kelly Meadows.

“It has been a journey,” LCI Principal Michael Ridout said. “I came along about half way through the project.”

Meadows said Granger Chevrolet and Lowe’s Toolbox for Education Grant has been there since the beginning of the project.

Ridout said the LCM maintenance department; the LCM Education Foundation and Julia Dickerson from the LCM CISD Administration Building have also been instrumental in making the dream of a playground a reality.

Phase Three will include a pavilion over the play area.

“The pavilion will protect the children from UV rays, hopefully extend the life of the equipment, and decrease the heat,” Meadows said. “It also includes security cameras and the completion of the signs.”

Meadows also said she hopes the recreational area will become a pilot program for other communities and schools.

“It is not too late to be a part of a life-changing project,” Meadows said.