Cardinals bounce back to take down WO-S 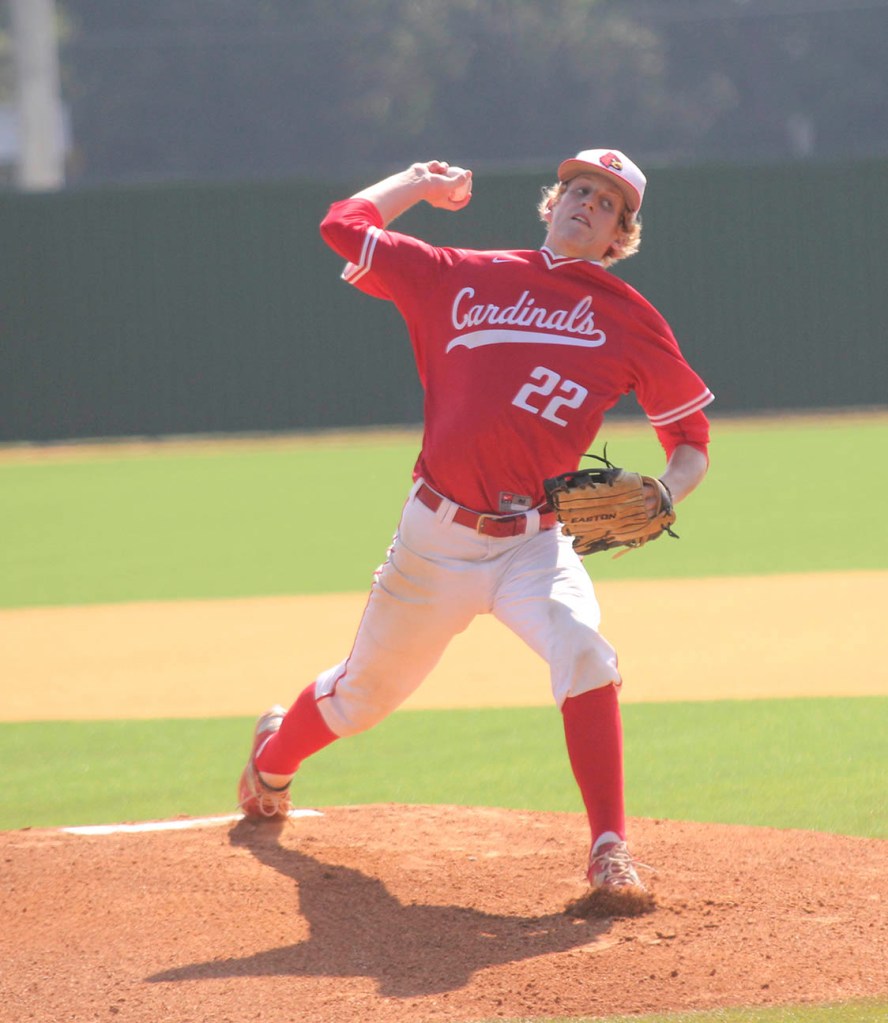 JASPER – For the second straight week, the Bridge City Cardinals dug themselves out of a hole, this time against District 24-4A rival West Orange-Stark Saturday in the Class 4A Region III quarterfinals at Jasper High School.
After dropping Game One to the Mustangs on Friday night, the Cardinals answered Saturday with a gut check, taking down the Mustangs 6-3 and then held on for a dramatic 3-2 victory in Game Three.

Last week, the Cardinals dropped Game One of their area round series to Bellville 5-2 only to bounce back to win going away, 17-2 and 7-0.

“For two straight weeks, we found ourselves down but the kids never wavered and kept on battling,” said Cardinal coach Chad Landry. “The kids really stepped up in some tight situations today and delivered.”

The Cardinals will now move on to face either Waco Robinson or Lufkin Hudson in the regional semifinals next week.
The Cardinals (24-9-1) jumped out to a 3-0 lead in Game Three and then fought off the always charging Mustangs (18-13-1), who advanced all the way to the Class 4A State Championship Game last year.

“Give credit to coach (Shea) Landry and those Mustangs, they are so darn tough and you want find any teams that play harder than they do,” said Landry. “We had four teams from our district (also LC-M and Silsbee) that were battling in the third round and that shows how strong baseball is in our area. It’s hard to argue, I think District 24-4A is the toughest district in the state.”
Tanner Doiron, despite battling cramps, gutted it out on the BC mound to earn the win in Game Three. He worked 5 1/3 innings, allowing three hits while striking out four and walking two before the cramps forced him out. Kevin Gordon got the save for the Cardinals as he pitched the final 1 2/3 innings, allowing three hits.

“Tanner gave us a tremendous effort, despite battling those cramps,” said Landry.” It was hot out there today. Kevin came in there and came up big late. We really liked our chances with our pitching if we could get it to a third game. WO-S got good pitching from Payton Robertson too in that last game. I was glad we got some early runs that gave us a little momentum and then we hung on. I’m so proud of our kids, proud of the Mustangs, proud of our district. Hopefully we can keep this thing going.”
Robertson went all seven innings for the Mustangs, scattering five hits while striking out four and walking six.
The Cardinals grabbed a run in the top of the first inning.
Kyle Bergeron drew a leadoff walk and went to third on a Schuyler Thibodaux infield single. He came in to score off a Tod McDowell sacrifice fly to centerfield.
Bridge City snared a pair of runs in the top half of the second.
Austin Fitts led off by getting pelted by a Robertson pitch and Gordon followed with a walk.
Bergeron made it 2-0 when he ripped a single past third base and into left as Fitts raced in to score.
Bergeron and Gordon would convert a double steal as Gordon was able to get home safely for a 3-0 Cardinal edge.
The Mustangs drew to within 3-1 in the bottom of the fourth.
Jack Dallas led off with a single to left and swiped second and Ryan Ragsdale followed with a walk. Chad Dallas was then hit by a pitch to load the bases.
BB Tezeno hit into a fielder’s choice as Jack Dallas was forced out at home.
Kaleb Ramsey brought home Ragsdale with a single up the middle but Chad Dallas ended up being tagged out at home, trying to cut into the margin. Doiron got out of the trouble by getting Tre Bernard to fly out.
The Mustangs had one last gasp in the bottom of the seventh as the Cardinals were trying to hang on.
With one out, KJ Miller crushed a deep double to centerfield and moved to third on a Robertson groundout.
Gordon helped preserve the Bridge City victory when Jack Dallas hit a 1-1 offering to second base and was thrown out at first.
Cardinal senior Bergeron went the distance on the hill for the Cardinals in Game Two as he scattered just four hits while striking out three and walking five.

“Kyle really came through and delivered,” said Landry. “That was the most pitches he’s thrown this year. He came through for us big-time in Game Three against Bellville and was strong again today.”
The Cardinals picked up nine hits off WO-S starter Chad Dallas and reliever Ragsdale. Dallas worked 5 2/3 innings, giving up eight hits while striking out three and walking four.
WO-S would grab its only lead of the day in the top of the third inning.
Bernard led off with a single to shallow right and Ronald Carter reached on an error. Bernard was able to truck in when Robertson, who was 3-for-4, belted a RBI single to left.
The Cardinals had a big bottom of the fourth as they picked up just
one hit to net four runs.
Fitts led off by getting plucked by a Dallas pitch. Gordon reached on an error as Fitts went all the way to third and eventually scored on a wild pitch to tie it.
Gordon moved to third on a sacrifice bunt by Justyn Romero. After Bergeron walked, Thibodaux, who was 3-for-4, put down a perfect bunt single down the first base line to score Gordon for a 2-1 Cardinal edge.
After McDowell moved runners over after a groundout, Doiron reached on an error after a bad throw from short on a grounder as two runs came across.
The Mustangs drew to within one in the top of the fifth.
Bernard led off by getting hit by a Bergeron offering. With one out, Miller drew a walk and both runners advanced on a wild pitch.
Robertson came through again, this time stroking a two-run double up the middle to make it 4-3.
The Cardinals found some insurance in the bottom of the sixth.
Thibodaux had a leadoff single to centerfield but courtesy runner Derick Dearing was thrown out at second on a steal attempt b catcher Jack Dallas.
With two outs, Doiron reached on an infield single and Caleb Dubois singled to left as Ragsdale then replaced Chad Dallas on the Mustang hill.
Riley Harris promptly planted a RBI single to right to score Doiron and Dubois was also able to race on the play as the Mustangs had a throwing error to make it 6-3.