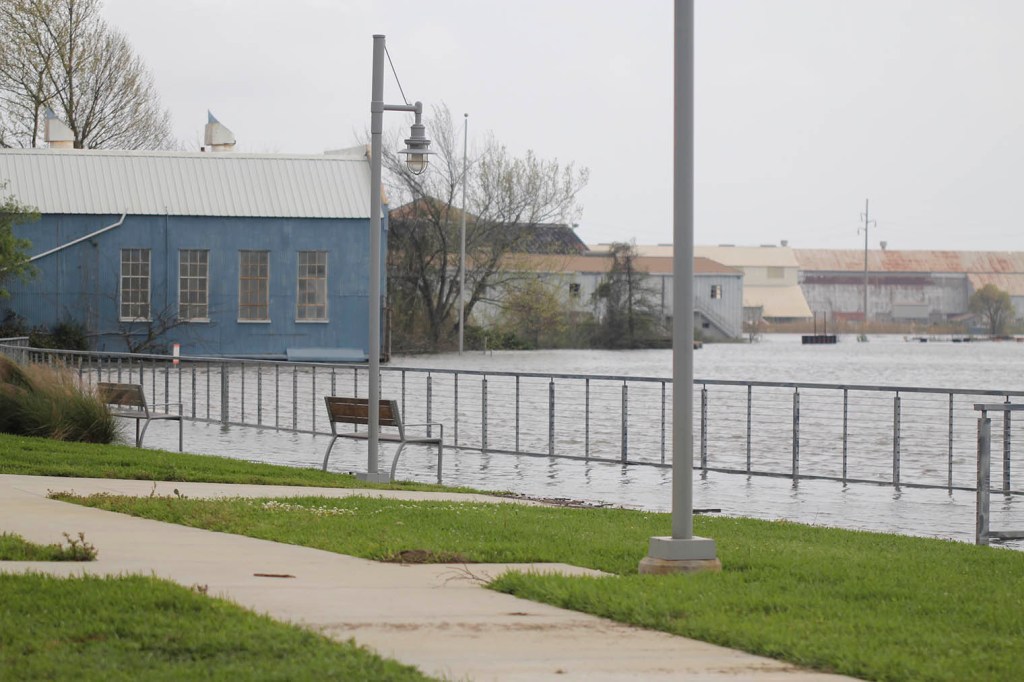 Van Wade/The Orange Leader Water from the Sabine River covers some of the river walkway on Front Street on Thursday.

As the waters start to drain from roadways and homes, residents are waiting.

While a mandatory evacuation has been lifted for the City of Pinehurst as of 9 a.m. Friday, other areas remain under the declaration.

Harry Bias, of Orange, walked from Second Street to 10th Street in Orange on Thursday to pick up supplies for his aunt.

“There is just too much water for her to leave her house,” Bias said. “She says she is ok. I walked to her house to check on her.”

According to Bias, the closer to Simmons Drive, the worse the water.

“I live in the Oaks and it is bad over there,” Bias said. “We saw wild hogs running through there this morning.”

Wild life is a concern for residents in the areas affected by the flooding.

Orange County Office of Emergency Management is warning residents to avoid entering the waters as flood waters in and around Orange may contain snakes, alligators and other wildlife, as well as, other debris that pose a health risk to humans. Entering the waters could hazardous to your health, according to a press release.

Residents are also reminded helicopters and airplanes will continue flying over the area to access the damage. For safety of those first responders, drones are not permitted in the areas.

Concerned citizens outside the affected areas are questioning the damage thus far. Interstate 10 eastbound may be free of water but was damaged by the flood waters.

Officials on both sides of the state line are monitoring the westbound lanes, where water exists and is receding. Damage has been identified and must be repaired before the interstate can be safely reopened. No timeline has been set as to when those repairs will be completed, but TxDOT is working to expedite those repairs, according to a press release from TxDOT.

Along the rivers, the Sabine River will slowly fall this weekend into next week. Water is receding out of the city of Orange and areas north of Interstate 10, but further upstream, standing water will linger in the Deweyville and Starks areas, according to the National Weather Service in Lake Charles.

Kurviest Murphy, of Cove, has maintained a watch on family and neighbors homes in his area.

“I don’t see the water getting much higher than it is now,” Murphy said Thursday morning. “We have to go by the tides as well.”

Murphy said he warned his wide to watch out for unwelcomed animals in the area.

“Another issue with this water and living by the march is we need to be aware of snakes, nutria rats and gators,” Murphy said.

While Murphy said the waters had not invaded his house yet, he is hoping the north wind with the rain expected this evening into Friday, will help take some of the water out.

The Sabine River near Orange is expected to hold near 7.5 feet for another 24 hours. However, the city of Orange and areas north of Interstate 10 towards Little Cypress should see slowly receding waters during this time, according to the National Weather Service.

Rachel Brady, of Orange, surveys the waters flooding Meeks Drive at the feeder road and towards the neighborhood behind Northway Shopping Center.

“Where I live is fine,” Brady said. “I am just surrounded by water on the surrounding streets.”

Brady’s mother owns a business in downtown Orange and moved everything to Brady’s house during the evacuation.