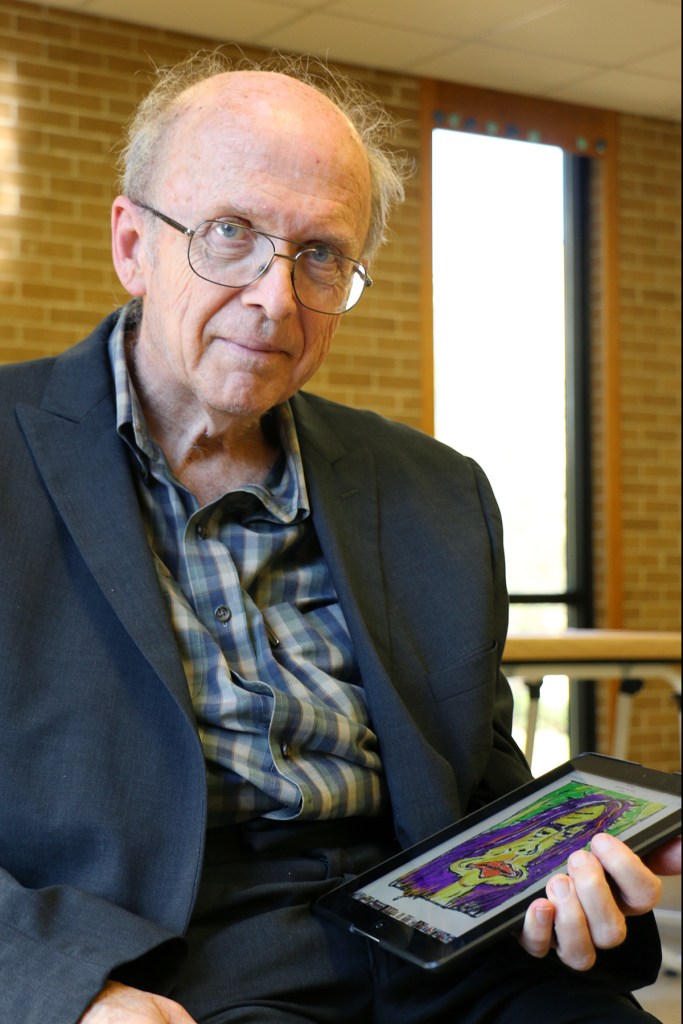 McNeese State University art professor Martin Bee displays one of the many illustrations of rock star Steven Tyler that he created for the Skittles commercial that ran during Super Bowl 50. Bee submitted several illustrations until the ad agency and Tyler agreed upon the sketch used in the commercial. McNeese Photo/Anne Cobb

What does a McNeese State University professor, rock star Steven Tyler and Super Bowl 50 all have in common? This year’s popular Skittles commercial.

You know the one –Tyler comes face to face with a caricature-like portrait of himself made out of Skittles that comes to life and is encouraged by Tyler to go “higher” and “higher” as it belts out the iconic rock song “Dream On” performed by Tyler with the band Aerosmith back in the 70s before it explodes into a million pieces on that last high note?

Martin Bee, professor of art at McNeese since 1987, created the artwork for Tyler’s portrait for that commercial. And no one knew, not even his classes, until the night of Super Bowl 50.

“I had signed a non-disclosure agreement so that’s why I couldn’t say anything,” said Bee. He did provide a link to the finished commercial on his Facebook page during the game and the word spread.

Bee, who teaches courses in illustration, graphic design and graphic design history at McNeese, said his students were excited for him. “It blew their minds,” said Bee. “And they wanted to know how I got the job.”

So, how was his artwork selected for the Super Bowl spot?

Bee was contacted a week before Christmas by a representative of Doyle Dane and Bernbach Chicago, a branch of the DDB Worldwide advertising agency, after someone at the agency saw some of his work in the Directory of Illustration, a showcase for illustrators that is outsourced to major media outlets all over America. Bee has been with the directory for four years.

“As a part of the creative team producing the commercial, I worked closely with the art directors at DDB and Tyler to quickly produce – in just three days – the right artwork for the commercial,” said Bee. “It took several illustrations until the ad agency and Tyler agreed upon the sketch used in the commercial.”

Bee’s illustration of Tyler was then altered to incorporate the Skittles candies and turned into a live animation clip used in the commercial titled “The Portrait.”

He said he has worked on other national campaigns but not along the lines of “this magnitude.”

The commercial can be viewed by searching “Skittles: The Portrait” on www.youtube.com.