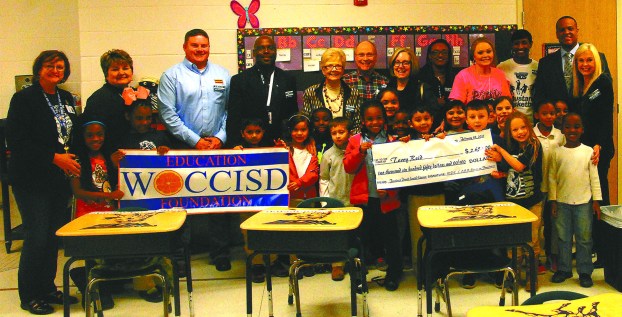 By Dawn Burleigh and Bobby Tingle

ORANGE — It was a day of bells ringing and teachers cheering as the West Orange Cove Consolidated (WOCCISD) Education Foundation awarded grants to teachers for the purchase of educational materials for the classroom.

“We are excited to be providing awards for the fifth year in a row to innovative educators in the West Orange – Cove CISD,” WOCCISD Education Foundation President Krispen Walker said in a press release. “These educators use the funds awarded to them to provide opportunities in and out of the classroom that would not otherwise be available. With the continuing support of the community and board members, it will be possible to provide opportunities for years to come.”

Since the foundation began awarding grants in 2011, 50 grants in excess of $100,000, including this year, have been awarded to classroom teachers in the WOCCISD school system.

“I am speechless,” First grade teacher Terry Reid said when she received a grant for $2,650. “I will use it to purchase the Fountas & Pinnell curriculum. This is not only good for English Second Language students but for all students. This money is the best.”

Reid said she purchased Fountas & Pinnell material before with her personal funds to benefit her students.

Reid’s students shouted with joy when she told the class the check meant they could purchase more books.

“Our push is literacy because it is the key to everything,” West Orange Stark elementary Principal Glenetta Henley said.

Those who received grant awards are:

Dr. Lois Bready and her brother, Doug Bready, were present to help award the grants. Their families established the Foundation in memory of their parents Eva and Gerald Bready. Eva was a beloved and innovative teacher in the school district who prepared a generation of students to excel in science and significant contributions to their communities.

J. Ashworth and J. Baggett were promoted to the rank of Lieutenant on Friday during a promotional ceremony held in... read more