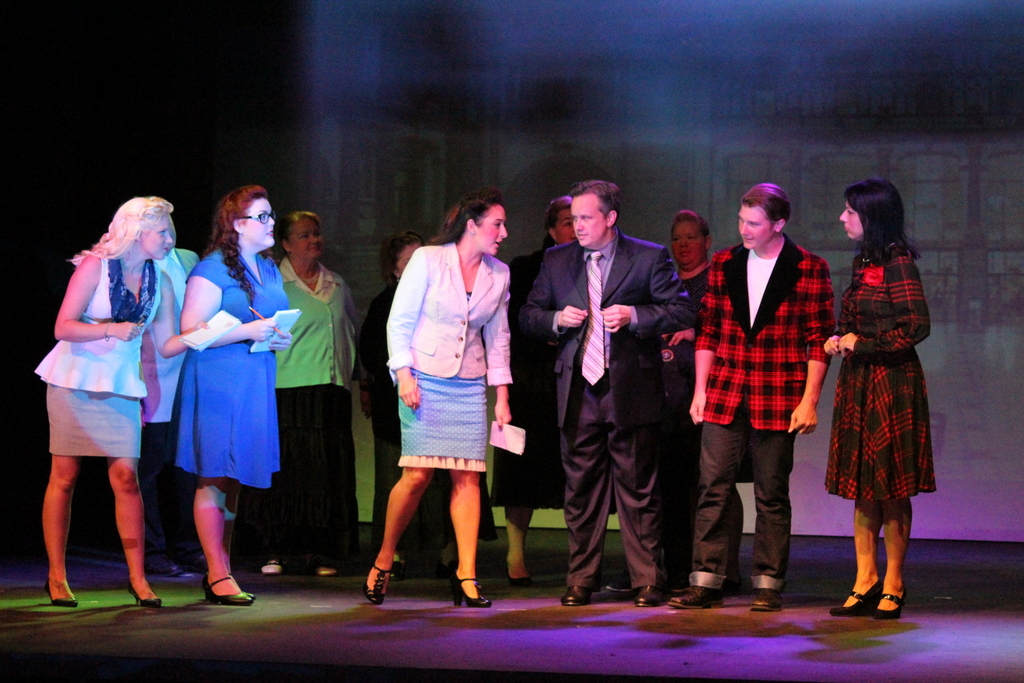 There’s a blast from the past in Orange. Orange Community Players have a must-see production of “Bye Bye Birdie” brightening up their stage.

The play is set in the 1960’s and features a bumbling mama’s boy, Albert, and his long-suffering secretary, Rosie, who use an Elvis-like singer, Conrad Birdie, to get out of financial trouble. Albert writes a hokey song for Birdie who is about to be drafted into the army. Kim, a fanatical teenage fan eager to grow up, is selected to give him a kiss good-bye. The plan is for the publicity from this kiss to make the song a big hit and make money for Albert.

The play was originally co-produced in 1960 by a rich guy from Orange, Texas, L. Slade Brown. Upon hearing the song, “One Boy”, legend has it that he wrote a check for $75,000 to get the play started on Broadway. There are rumors that the check was actually larger.

Some truly great songs are in this play such as “Put On a Happy Face”, “Kids”, and “A Lot of Livin’ to Do.” There is a huge cast, with many young actors, fainting and swooning over Birdie, showing off their acting chops for the first time. J’Dynne Illa-Postel plays a young girl who is sad because she thinks she will be too old for Birdie when he gets out of the service. Her tap dance with Albert deserves a special shout out. All of their dance routines are fun and fresh. Well done!

Albert and Rosie are played by a real-life married couple, Chad and Leyni Petersen. These two actors exhibit astounding professionalism in breathing life into their characters, as well as showing off their singing and dancing talents. Kudos to this couple!

Kim’s family, portrayed by Michael Hudnall as her father, Natasha Franks as her mother, and Landyn Carter the little brother, all do terrific jobs. Hudnall is especially good as the disgruntled father of a teenager. He ends up enjoying the limelight on the Ed Sullivan Show and “photo bombs” Birdie on television. Jennifer Charles plays the daughter, Kim MacAfee, and does a terrific job in her first dramatic role, as the vivacious daughter with youthful enthusiasm.

Gannon Miller turns in a flawless performance as Birdie. His singing, dancing, and stage presence make him a break out star. Bravo Birdie!

The scene stealer is the domineering, prejudiced, hilarious “Mama”, played by Judy Smith. She grabs the audience’s attention whenever she is on the stage and even her derriere gets in the act with some unusual moves. Good show, Mom!

Special mention needs to be made of the stalwart Director, Thomas C. May, who at the very last minute also had to assume the role of Hugo Peabody, Kim’s boyfriend. The show had to go on. Amazing job!