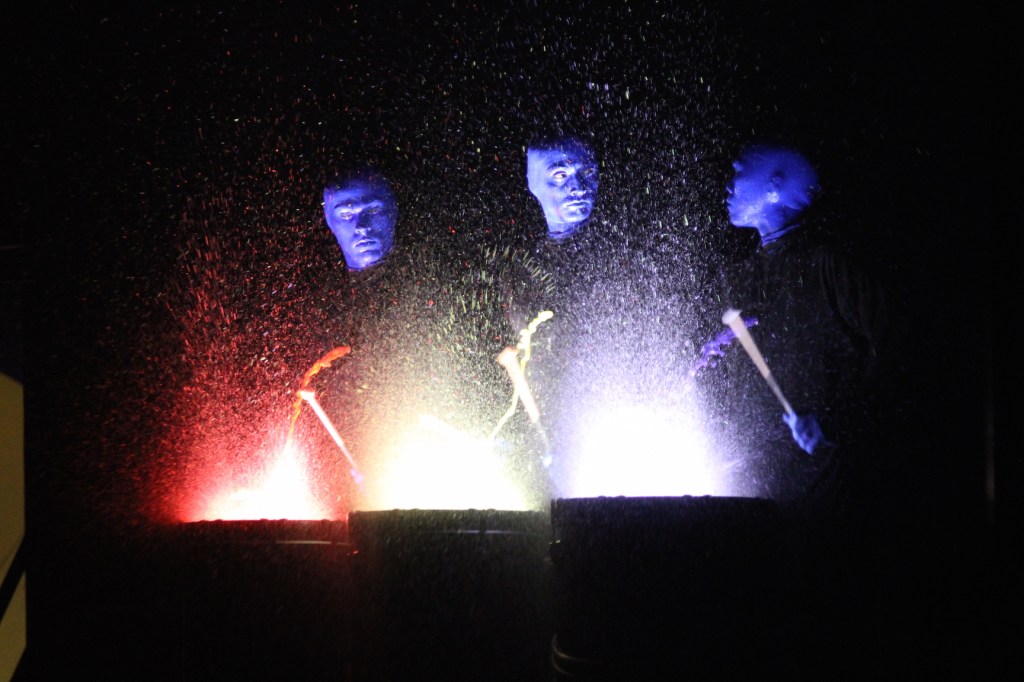 The highly popular and extremely entertaining Blue Man Group returns to the Lutcher Theater in Orange this December for the first time since its three sold-out performances in March 2012. Tickets are on sale now. (Tommy Mann Jr. / The Orange Leader)

One of the most successful touring attractions in the country is headed back to Orange this holiday season.

The Blue Man Group, which performed three sold-out events when the group was last at the Lutcher Theater in March 2012, is back on the road traversing the United States in advance of taking its current tour around the world. It’s upcoming performances in Orange will feature some of the classic Blue Man favorites, as well as brand new content sure to thrill audiences.

“People had so much fun the last time the Blue Man Group was here,” said Jim Clark, director of the Lutcher Theater. “The group even had such a good time they wanted to come back. This tour is winding down and we were able to get them back just in time for the holidays.

“We thought this was a great time to have the show here in Orange because a lot of people may be off work or have family coming in for the holidays,” Clark explained. “It’s such a fun show. Last time they had some of the crowd involved, confetti blasts, and large balls bouncing through the crowd. You will have a lot of laughs and leave feeling really good. We’re excited to have them again.”

According to a press release, the trademark of every Blue Man Group show is a combination of visually stunning multi-media, multi-sensory performance. The Blue Men are accompanied by a live band, whose haunting tribal rhythms help drive the show to its unforgettable climax.

“We live in a fast-paced, ever-evolving world. The Blu Man character is a curious being who explores our cultural norms, our every-day objects, but he sees them with fresh eyes and an innocent perspective. As the world around us changes, we are constantly inspired to create new scenarios for the Blue Man to explore,” said Phil Stanton, Co-Founder of Blue Man Group.

“Plus, we really like to keep things fresh and vibrant. For almost 25 years, although the content within the show varies, the mission of every Blue Man Group show has remained the same – to bring the collective audience together with the Blue Men for a euphoric celebration, a heightened state of being alive,” added Co-Founder Chris Wink.

Blue Man Productions is a global entertainment company best known for the award-winning Blue Man Group show, performed in 15 countries and seen by more than 35 million people worldwide since 1991. A dynamic combination of music, comedy and technology, the show appeals to a broad range of age groups and cultural backgrounds. It is continually refreshed with new music, fresh stories, custom instruments and state-of-the-art technology.