Mustangs too much for Silsbee 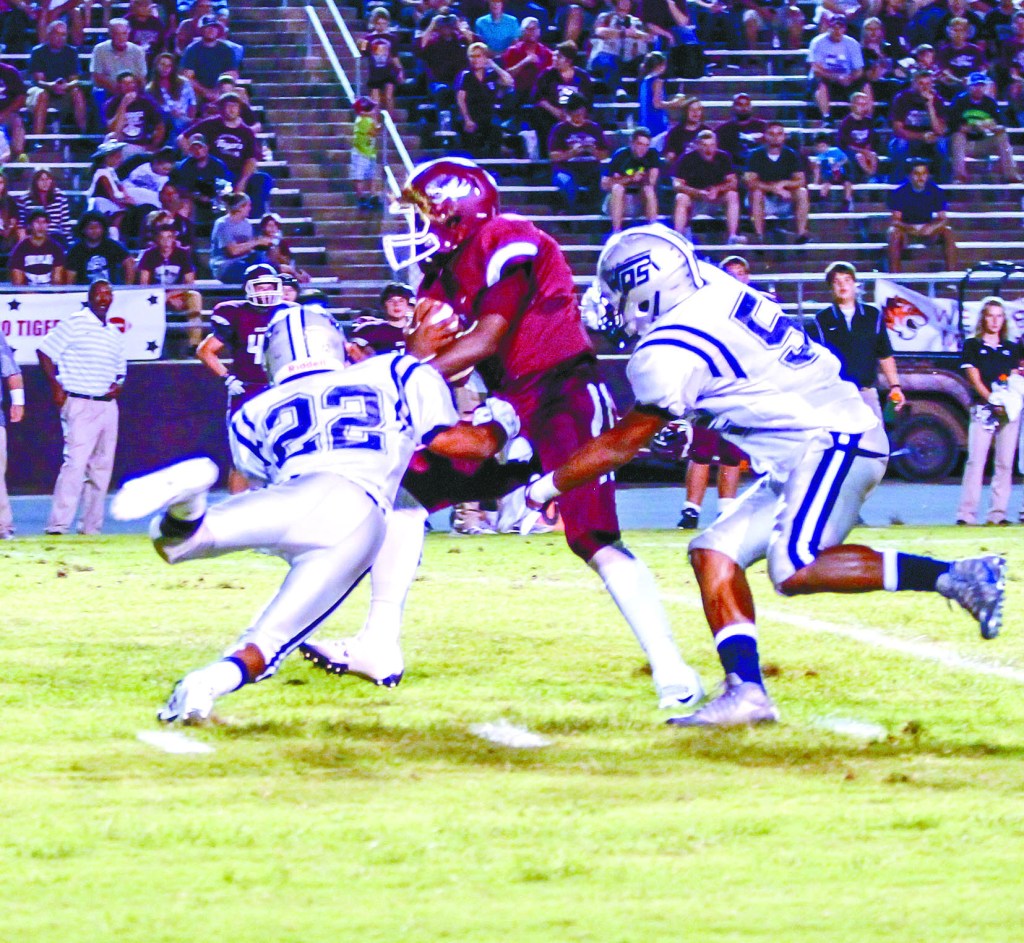 SILSBEE — Silsbee quarterback Dontre’ Thomas turned in a MVP style performance once again, but it was West Orange-Stark junior Jackson Dallas that bested that to lead the Mustangs to a 49-28 win Friday night on the road at Tiger Stadium.

Dallas kept the young Mustang offense flying and igniting a packed crowd as he completed 17-of-23 passes for 181 yards. He passed for three touchdowns and ran for another as the Mustangs (4-0) remained perfect on the season against the feisty Tigers (3-1).

“Silsbee is a great team and very athletic team,” said Dallas. “Me and my receivers work over time to make sure we’re all on the same page and it pays off for us against tough teams like tonight.”

The Mustangs piled up 505 total yards in the win, including 324 on the ground.

Jeremiah Shaw ran for 124 yards on 14 carries and Melech Edwards chimed in with 116 yards on 19 carries.

The Tigers’ received 119 yards on 17 carries by Thomas. Thomas completed 6-of-13 passes for 152 yards. Kolton Mackey had five catches for 101 yards.

“We have to work on our tackling and that will come with time,” said Mustang coach Cornel Thompson. “Our defense is young. For some, this is only their fourth game on varsity. We were able to get out of here with a victory and this is just such a tough place to play. There were some athletes on the field tonight, that’s for sure.”

The Mustangs got started early, marching 66 yards on their first drive in just over three minutes. Dallas hit Thomas Wallace on a short screen pass for a 12 yard score for an early lead, 7-0.

Silsbee, however, prove their offense was worthy with a 82-yard drive in less than 2 minutes that was capped by a Tre Lowe 28-yard touchdown run to give Silsbee an 8-7 lead after the two-point conversion was good.

After less than stellar defensive performance by both teams the defenses would step up on the next possessions as both teams went three-and-out to close out the first quarter. Jeremiah Shaw ended the Mustangs almost nine-minute scoring drought with a three-yard touchdown run to cap a 69-yard drive. Dallas notched a 24-yard touchdown run just minutes later to extend the Mustang lead to 20-8 with 4:55 remaining in the first half.

Thomas, however, put the Tigers right back in the game, scoring two rushing touchdowns of two yards and 28 yards in less than two minutes.

Silsbee led, 22-20 with 1:37 left in half. Dallas again answered everything Thomas had with a 67-yard drive that ended with a 28-touchdown pass to Thomas Wallace. Wallace had six catches for 68 yards yards on the night with two scores as the Mustangs snared a 28-22 lead going into the half.

Silsbee opened the second half with pride and power to excite the home crowd. Thomas drove the Tigers down the field and showed his arm strength with a 47-yard pass to Kolten Mackey. Thomas finished the drive with a five-yard keeper up the middle to tie the game at 28.

The Mustangs took control on the next drive. Edwards took off for a 27-yard touchdown run with 4:55 left in the third.

Dallas followed that up with a five-yard touchdown pass to Wallace to extend the lead to two scores, 42-28.

Mustang running back Tokebah Hughey notched one final score to lead 49-28 with 1:46 left in the game.

A Silsbee fumble on the next possession would seal the game as the Mustangs would run out the clock and get the win.

The Mustangs will build on the momentum from the big road win and travel next week to Baytown where they will take on Class 5A power Richmond Foster at Baytown Stallworth on Saturday at 6 p.m. 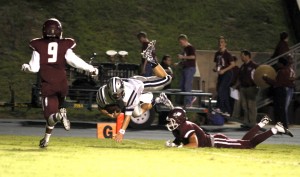 WO-S Mustang QB Jacksan Dallas (#3) leaps for a TD during first half action against the Silsbee Tigers. (Troy Jones / The Orange Leader)