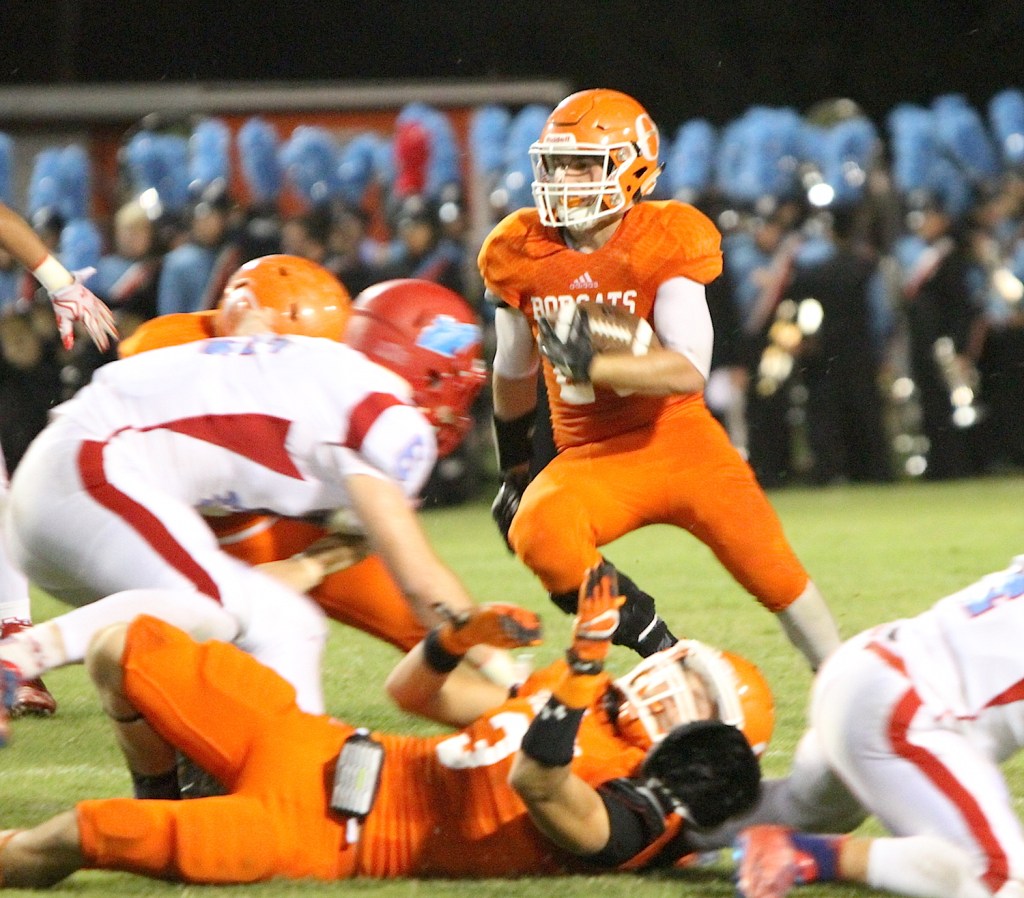 ORANGEFIELD – This is the one that literally slipped through the fingers of the Orangefield Bobcats.

Four fumbles spelled doom for the Bobcats as Lumberton took advantage for a 33-21 non-district win at F.L. McLain Stadium on Friday night.

In spite of the offensive miscues, the Bobcats still had a chance for a comeback, scoring two quick touchdowns in the fourth quarter to close a seemingly impossible gap.

Trailing 33-7 heading into the fourth quarter, the Bobcats scored two TDs in the span of just 49 seconds thanks to a perfectly executed onside kick.

On the final play of the third quarter, Orangefield (2-2 overall) back Christopher McGee reeled off a 37-yard run to get Orangefield to the 15. Five plays later, he bulled in from the 1 yard line for the score, closing the deficit to 33-14.

On the ensuing kickoff, Matthew Rainey kicked the ball perfectly and Chase Furlough pulled it down to give the Bobcats possession once again.

Quarterback Matthew Watkins took off for 38 yards on the first play from scrimmage, then McGee took it the final 11 yards over the next two plays, crossing the goal line from 7 yards out for a 33-21 score with 9:26 left in the game.

Once again, Rainey attempted the onside kick and the ’Cats almost pulled off a second miracle, just missing the chance to fall on the ball again. But the chances weren’t over for the Bobcats.

Lumberton fumbled on the next possession with Blayze Holley finding the loose ball. Orangefield had another opportunity at the upset. But two plays later, the Bobcats gave it back with their fourth giveaway of the night.

“We had some opportunities late but we weren’t able to convert on those,” Smalley said. “All we can do is get back to work and correct the mistakes we made tonight.”

From the first snap, the Bobcats struggled to hold on to the ball, fumbling into the end zone where Lumberton’s Michael Mott fell onto ball for a 6-0 lead just 16 seconds into the game.

“You have to give credit to their kids,” Orangefield coach Josh Smalley said. “They realized we had made a mistake and picked up on the ball in the end zone.”

After an Orangefield punt on its next offensive possession, Lumberton marched the field, finishing with a 26-yard run by Tim Rhodes for a 14-0 lead.

The Bobcats were again unable to convert on their next offensive possession, turning the ball over on downs. The Raiders responded with yet another touchdown, this one coming on the first play of the second quarter for a 21-0 lead.

Orangefield finally got on the board late in the second quarter when McGee scored from 4 yards out, cutting the Raiders lead to 21-7.

It took Lumberton just 25 seconds to push that lead back out after Mason Sikes hauled in a pass from Stephen Yarbro for 56 yards and a 27-7 advantage heading into the halftime break.

Lumberton, 3-0 with the win, scored its final point on a Thomas 8-yard run with 54 seconds left in the third quarter.

Lumberton’s Caleb Thomas led all rushers with 102 yards on 17 carries, while Orangefield’s McGee finished with 19 carries for 99 yards. 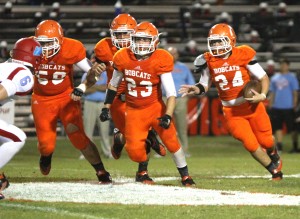 Hunter Evans (24) follows a line of Bobcats blockers for a nice gain in the second quarter against Lumberton. (Tommy Mann Jr. / The Orange Leader)