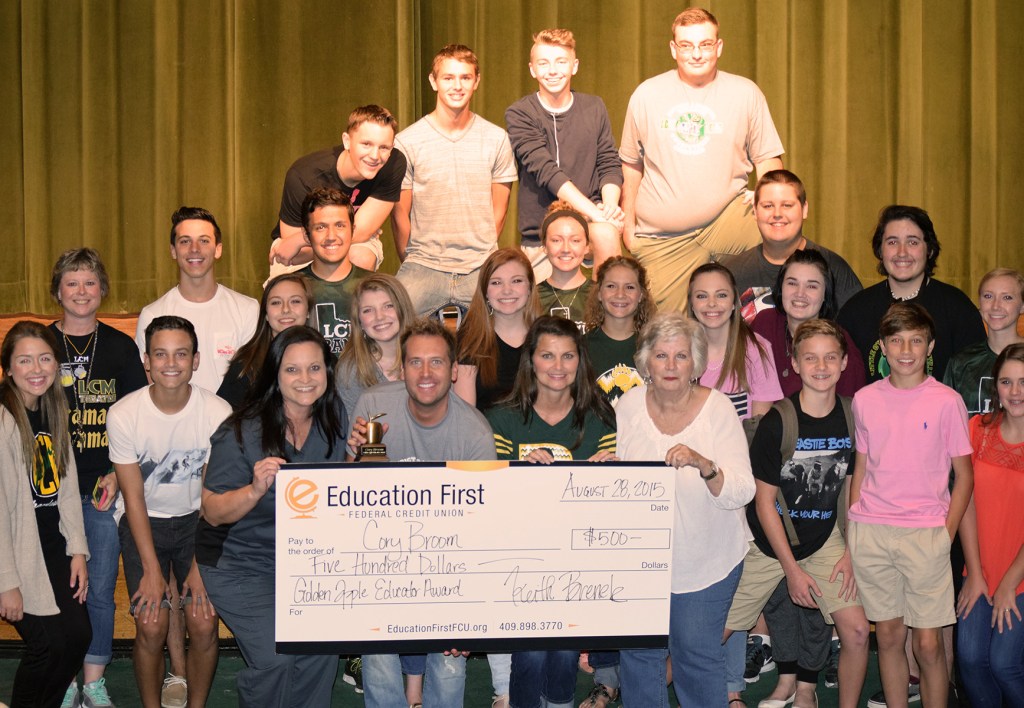 Education First Federal Credit Union is proud to announce Cory Broom of Little Cypress Mauriceville High School as the recipient of The Golden Apple Educator Award for the month of August.

As the 2015-16 school year began, Cory Broom was awarded with a Golden Apple and a $500 check from Education First Federal Credit Union in front of his drama students, LCM staff and many of the parents who nominated him. Onlookers met inside the high school theater to surprise him with the news.

Upon receiving his award in front of so many individuals who admire and respect him, Broom stated that he “is very honored and humbled to be recognized as the recipient.” He went on to say “Many educators give countless hours outside the classroom to benefit students, so to be selected among so many of my hard working peers is truly an honor. We couldn’t possibly reach the goals we set for ourselves annually in the LCM Theatre Department without hard working students and the unwavering support of parents, administrators and the community.”

Broom received multiple nominations from parents of prior students and from peers who currently teach alongside him. Robin Milstead, who was there to watch Broom receive his award, noted in her nomination “he sacrifices his own personal time to dedicate time to help the kids achieve their goals. I’m so grateful for all he has sacrificed for them!”

It was apparent from the broad smiles Broom received from his students and co-workers and from the nature of Broom’s acceptance, that he was truly surprised. His nominators and onlookers alike noted his professional expertise, and Lynae Sanford added that he has “a compassion for his students and unmatched leadership skills.”

EFFCU announced The Golden Apple Educator in January 2015 as a way to recognize those who have dedicated their hearts and lives to the profession, and go the extra mile to make a diﬀerence in the life of a student. Each

month a local educator will be selected and featured on a segment on the KFDM Channel 6 Morning Show, receive an award and $500 check in honor of their commitment  to education.   To nominate an educator for The Golden Apple  Educator Award visit the Education First website at https://www.educationﬁrstfcu.org/about-­‐us/golden-­‐apple