Cardinals hold off Newton for 18-13 victory 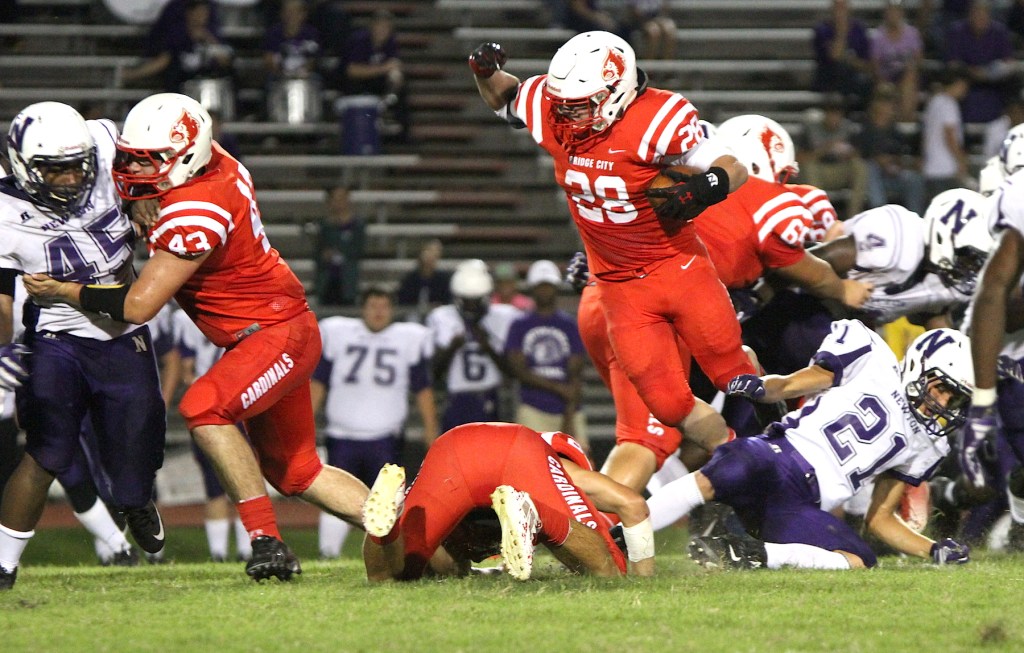 Cardinals running back Cacye Draper (28) leaps over a Newton Eagles defender and a teammate on his way short yardage during Friday's victory over Newton. (Tommy Mann Jr. / The Orange Leader)

Fortunately, the Cardinals are good at killing giants.

BC improved to 2-0 for the season after beating No. 4-ranked Newton 18-13 at Larry B. Ward Stadium. The upset win comes a week after the Cards beat another of the state’s best teams, Kirbyville, on the road to open the season.

“We talked about David and Goliath and we knew we were the underdogs coming in,” BC head coach Dwayne DuBois said. “We’re going to respect every opponent we play, but we aren’t going to fear anyone. We’re not going to back down. We’re going to get out here and do our very best every time. The thing is, someone has to win, so why not us?”

The Cardinals won this one by controlling the game clock with a ground game that attacked the gut of the Newton defense. Bridge City’s unrelenting running game amassed 196 yards on 45 carries, led by Cayce Draper’s 139 yards and two touchdowns on 15 carries.

Draper’s first touchdown run came at the end of an 8-play, 63-yard drive. During that offensive push, Draper ran the ball five times for 52 yards. A missed extra-point kick left the Cards leading 6-0 with 7:57 left in the first half.

Newton, with its typical explosive offensive attack, scored quickly, rolling 70 yards in just six plays, capped by a 9-yard TD run by Gabe Foster with 5:50 left in the half. The extra-point kick put the Eagles up 7-6. Foster finished with 10 carries for 69 yards.

After a three-and-out possession for the BC offense, Newton went back on the attack. Bridge City’s defense, in a statement about how the rest of the night would go for the Eagles, held Newton to negative-8 yards on the drive. BC’s Derrick Dearing recovered a Newton fumble and the Cards took possession again at the Eagles’ 35 yard line.

“Derrick was all over the field. I’d love to use Derrick on offense but he’s so valuable on the defensive side of the ball,” Coach DuBois said. “That’s an explosive ball club over there and he was able to help control that. He’s a senior captain but I’m asking a lot of all these seniors and these captains. In order for us to be successful, they’re going to have to be the leaders of this team.”

Four plays later, sparked by a 33-yard run by Draper, Camden DuBois bulled across from the 2-yard line for the Cardinals score and a 12-7 lead with 1:30 left in the half.

The Cardinals opened the second half with a clock-killing drive that took nearly half the third quarter. Moving 80 yards in 10 plays, the Cards crossed the goal line again Draper pushing in from 2 yards out. With 6:34 left in the third quarter, BC held an 18-7 lead.

On the next Newton drive, the Bridge City defense stiffened again with Vaydon Abrego picking off the Newton quarterback to kill the possession. When Newton got the ball again, the Cardinals defense for the Eagles to turn the ball over on downs.

Bridge City committed its only real mistake of the game after fumbling deep in its own territory, setting up the Eagles for a 32-yard drive for a touchdown with 1:29 left in the game. Foster got in the end zone from the 2 yard line to cut the Bridge City lead to 18-13.

But, as BC bled the clock down the stretch, the Eagles ran out of time and the Cardinals ran off the field victorious.

“I’m proud of them for the effort and for the confidence they are showing,” Coach DuBois said. “But one win doesn’t make a season, two wins don’t make a season. We want to get better every week and get ready for district. Keeping the fans excited and involved and keeping our team excited and motivated, that’s what the Friday night experience is all about.” 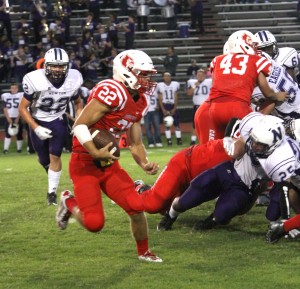