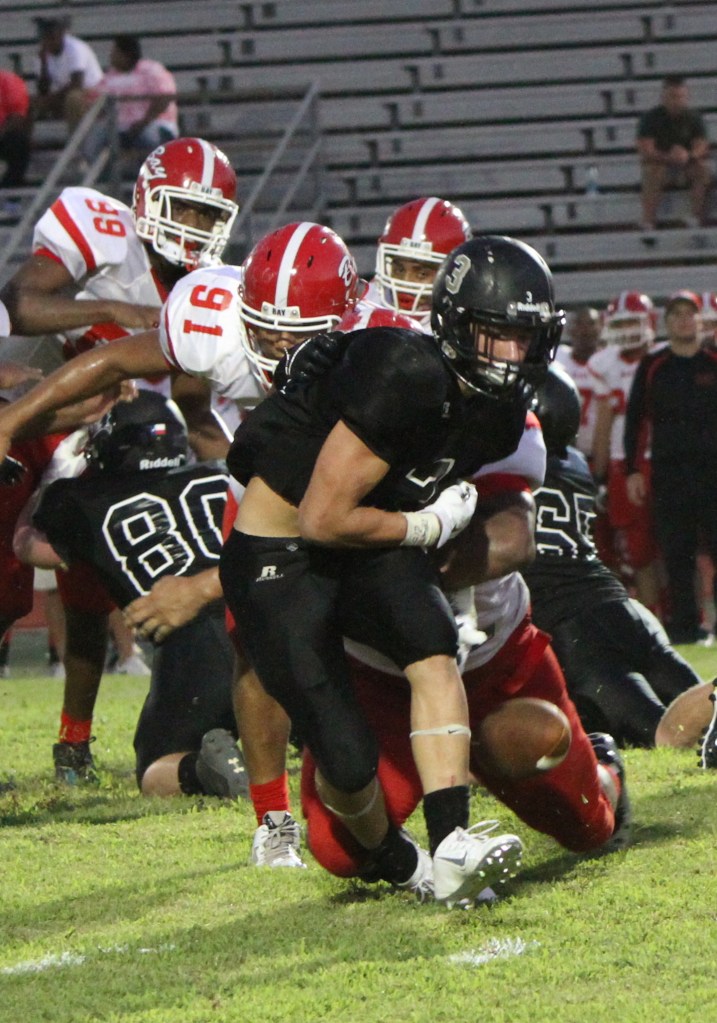 Haylon Leckelt (3) led the Pirates with 114 rushing yards on Friday night, but Vidor had five total turnovers which contributed to two Bay High touchdowns in the fourth quarter in a 19-7 loss to the visiting Tornadoes. (Tommy Mann Jr. / The Orange Leader)

(VIDOR) — Mistakes and missed opportunities proved too much to overcome as the Pirates dropped the opening game of the season to the Panama City Bay Tornadoes from Florida.

Five turnovers and costly penalties kept the Vidor Pirates out of the end zone most of the night and helped the visiting Bay High Tornadoes claim a 19-7 victory on Friday night at Pirate Stadium in Vidor.

“We won’t beat any team in the state of Texas with a game like that,” said Coach Jeff Matthews of Vidor following the game. “We had five turnovers and three personal foul penalties, and we still had a chance to win the game at the end.

“I’m not mad. I’m disappointed about the personal fouls,” he continued. “That’s embarrassing to me, as a coach. The defense played well, and the offense moved the ball, but we couldn’t get it in the end zone.”

The second quarter looked to be much of the same as Vidor and Bay High moved the ball in spurts, but it was Vidor which would strike first following a time consuming drive which was capped by a 1-yard run by Blake Rowe and a 7-0 lead for the Pirates with 4:42 remaining in the opening half.

Bay High (2-0) responded and responded quickly as running back Raekwon Webb took charge. The Tornadoes moved the ball down the field quickly, courtesy of a 36 yard jaunt by Webb. On the very next play from the Pirates 17 yard line, Webb burst through the defense for a touchdown and even the score at 7-7 at halftime.

Vidor (0-1) received the opening kick of the third quarter and quickly marched down the field as running back Haylon Leckelt seemed to find his groove. The Pirates missed an opportunity to take the lead when a drive fizzled at the Tornadoes 19-yard-line and a Bridger Quirante field goal sailed right of the upright.

After a scoreless third quarter, Bay High quarterback Justin Davis used a number of quick dropback passes to receiver Travis Martinez to move the ball down the field. Webb struck again, this time from 15 yards out, and gave the Tornadoes the lead at 13-7 following the failed extra point attempt.

Even after three fumbles and an interception, the Pirates kept fighting back against the Bay High defense.

After a punt, Vidor began its best drive of the night, from its own 35-yard line, with less than 6 minutes on the clock remaining. The three-headed running attack of Leckelt, Rowe and Trevor Duff helped the Pirates chew up the clock and the yards.

With 1:45 remaining on the clock, Vidor quarterback Kolbie Humble rolled to his right on 2nd and 18 from the Bay High 33 yard line. He looked as if he was about to be sacked, but he somehow managed to toss the ball to Leckelt for 14 yards.

As Leckelt turned to move upfield, a Bay High defender blasted Leckelt and knocked the ball up in the air into the waiting hands of a Tornadoes defender who raced 84 yards for the final touchdown of the night and sealing the win with 1:31 left in the game.