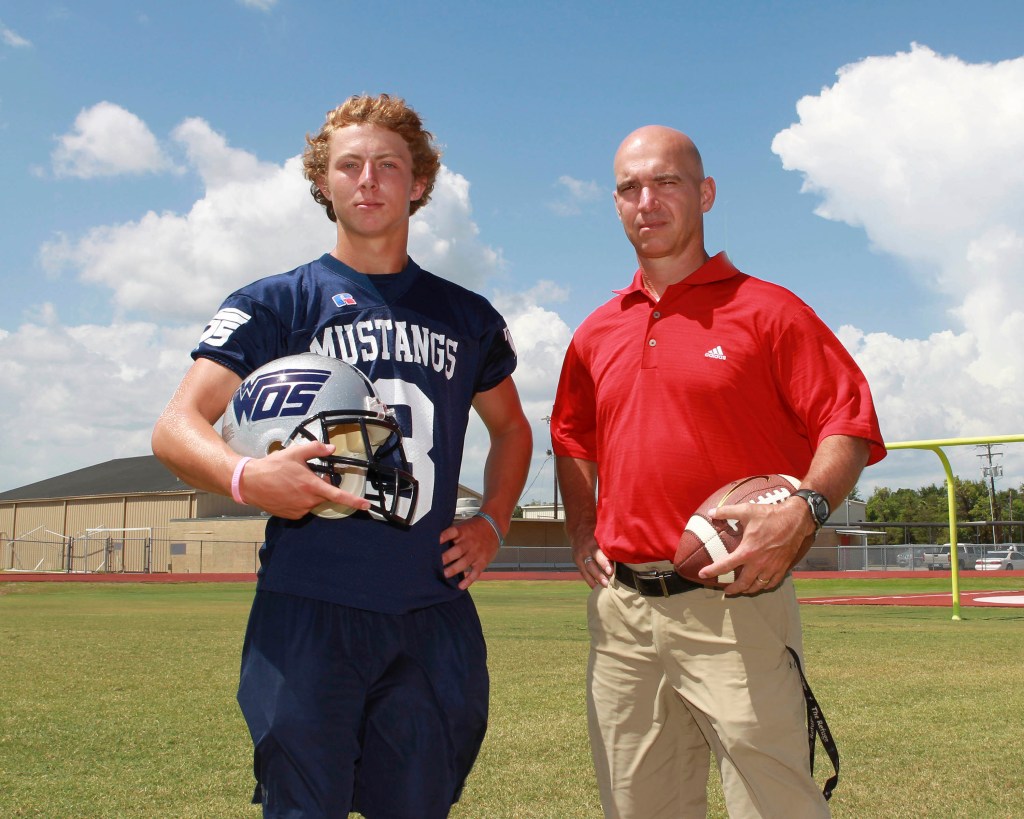 One is proud to be coming home to lead his charges while the other settled nicely into a home he did not expect last year and both are looking for another banner year in 2015.

Both know the fruits of success.

DuBois, a 1986 Bridge City graduate, led the Hardin-Jefferson Hawks to a 19-7 mark the last two seasons, guiding them to the third round of the playoffs each year after that school suffered a long drought. He was also the offensive coordinator at Vidor when the Pirates made the playoffs three out of four years before he went to H-J.

For Dallas, his sophomore year was a whirlwind.

Expected to be the junior varsity quarterback all season going into their season-opening Friday at LC-M last year, Dallas found out the Thursday before, that he was going to be behind center for the varsity the entire year due to a pair of tough losses at the position for the Mustangs.

Skeptics rose up everywhere and it did not take long for the young man to quiet all that noise. Sixteen weeks later, the Mustangs found themselves in Dallas playing for the Class 4A Division II State Championship.

Dallas, who heaped praise on a tremendous senior class last year for their leadership and confidence, had an amazing run, completing 168-of-291 passes for 2,353 yards. He tossed 31 touchdown passes and was picked off just eight times.

Dallas was not through yet as he helped lead the Mustang baseball program to the Class 4A State Championship game. He hit .375 for the season and had 25 runs batted in. He proved his grit on the mound, going 6-1 with a 1.47 earned run average and was the winning pitcher in three straight Game Threes in the playoffs as the Mustangs rolled all the way to Austin.

For Coach DuBois, it has been a smooth transition returning to the community he so dearly loves, along with his wife Cristal, who is also a Bridge City graduate.

DuBois has had success ever since he left Bridge City, where he was once an assistant in the early 1990s before shifting to Vidor and to Hardin-Jefferson.

DuBois helped lead the Vidor Pirates to three playoff appearances as offensive coordinator for long-time Pirate coach Jeff Mathews, who is also a Bridge City alumni. The winning continued in Sour Lake as the Hawks were put on the map after being pretty much a dormant program over the years.

It wasn’t east for DuBois to leave what he started at H-J.

“We’re forever grateful to Hardin-Jefferson and the Sour Lake community and we have friendships there that will last a lifetime,” said DuBois. “It just feels great to be back home. The community has opened its arms to our family and we feel blessed to be here.”

A winning program can bring about a lot of positive energy, which is important to DuBois, but helping young boys turn into men is what is most important for him.

“As coaches, you always want to make an impact on kids’ lives, instill work ethic and accountability,” said DuBois. “We want our players to show character and integrity on and off the field. If you show class on the field you have to show class off of it.”

DuBois would like to see the community rally around the program and he and Cristal are gung-ho about getting that accomplished.

“We want our parents involved, not just during football but 365 days a year,” said DuBois. “School activities are so important to any community. It’s important to get the kids, parents, coaches and fans together on one page and become part of a cohesive family. We want to see the stands packed on Friday nights. We were able to see that happen at Hardin-Jefferson and it was amazing. We’re looking forward to that happening here.”

DuBois looked up to the coaches he had while he was attending Bridge City along with the ones he’s coached with since.

“Our head coach when I played was Fred Bolton and he really inspired me,” said DuBois. “Coach David Guidry has always been a big influence over all these years. Coaches like Richard Briggs, Dwight Thacker, Bill Dixon, Troy Woodall and Chuck Young, those were not only great coaches but good, solid men that knew how to get kids heading into the right direction. Then there is Coach (Jeff) Mathews. There is a guy that stands for values and is always about the kids. Of course, winning district championships is always a top goal, but helping turn kids into young men is the greatest thing, especially when you look down the road 10 or 20 years later and see how the kids have flourished in their lives.”

DuBois has seen some outstanding players in his coaching days. The latest was linebacker/tight end Blain Padgett at H-J along with former Vidor standout quarterback /linebacker Montana Quirante. Quirante led the Pirates to back-to-back playoff appearances and was The Orange Leader Male Athlete of the Year in 2013.

“Every good team has its leaders and I’ve been fortunate over the last several years,” said DuBois. “Montana Quirante was one of those special ones that are rare as far as skill, dedication and leadership. I know he’s still young and just a junior but I see that kind of quality in Jack (Dallas), saw it first-hand all year last year.”

For Dallas, 2014-15 was a whirlwind, starting on Aug. 28, 2014, the day before the team that played longer than any other in Southeast Texas got its season kicked off.

“It was such a crazy week,” said Dallas. “I knew going in that I was going to be the junior varsity quarterback and I was looking forward too it. Then, all of a sudden, things changed in a hurry and I was thrown into the fire. I was getting some varsity reps in practice so I knew all the guys well. I was definitely nervous going into that game at LC-M that night.”

The things that got Dallas through that early stage was the coaches and some wonderful teammates.

“For the coaches to put that much faith in a little sophomore really gave me a huge boost of confidence because they honestly thought I could go out and do the job,” said Dallas. “One of the biggest things that helped me a long was a great senior class. I had those guys in my corner from the first day and they had my back the whole season. I felt like they helped me get into a comfort zone. Plus, those guys were so athletically gifted too, which was a big help. I’m really grateful for those guys for believing in me and they always made me feel like one of the guys.”

After navigating through one of the toughest non-district slates that the state of Texas has to offer, the WO-S coaching staff really started to let Dallas fly when District 9-4A Division II started as Dallas’ numbers began to grow each week.

In 9-4A play, Dallas completed 53-of-78 passes for 864 yards and perhaps the best stat, 13 touchdown passes and no interceptions.

His biggest 9-4A night was against Hamshire-Fannett in which half of his passes went for TDs. He was 12-of-13 for 329 yards and tossed six scores.

“The coaches didn’t want to overload me early in non-district but when district came, they realized I could handle it and that really got things flowing,” said Dallas. “When you have guys like Deionte (Thompson) and Will (Johnson) to throw to , it can make anybody’s job easier. They could go up and get everything and were always right there to give me a boost.”

In the playoffs, the Mustangs turned to a more pounding style of a running game and stout defense but that didn’t stop Dallas from producing. He threw for more than 900 yards and nine TDs in six games.

Against LaGrange in the regional finals, he completed 11-of-13 passes for 202 yards and three TDs in a 42-7 blitzing of the Leopards.

In the heartbreaking 35-25 state title loss to Gilmer, Dallas passed for two scores and ran for another.

No its on to the 2015 season in which there is a clean slate. A clean slate is definitely where the Mustang offense is going into the campaign. They only have one starter back on that side of the ball. Guess who?

“We lost a great senior class, there is no doubt about that,” said Dallas. “We know, as a group, that we are all going to have to step it up a notch and get that experience. There is a lot of learning going on right now and we’re going to be patient about it and look to get better each time we go out. I was able to experience that last year. I know we have the potential to be very good again.”

The Mustangs have some key seniors returning, more so on defense. WO-S will be looking for a big junior class to make heavy contributions.

“We have a great group of seniors back with experience and a junior class that is big, there’s probably more than 20 of us,” said Dallas. “A lot of us may not have varsity starting experience but we’ve played together pretty much all of our lives and we’ve won a lot of games. Growing up with those guys, we all know we have a special bond on and off the field that will help us succeed.”

Dallas had something surprising to say.

“I really think we have more speed then we did last year from our young freshmen all the way to the top,” said Dallas. “We’ve been working hard on connecting with our routes and I really think we can come up with some big plays.”

OF course, the Mustangs are ranked high in most polls, including No. 1 in Class 4A Division II by Texas Football. Then there is also that tough non-district schedule that includes three 5A teams in LC-M, PN-G and Richmond Foster along with small-school powers like Jasper, Silsbee and Newton.

“At WO-S, we always know that people like to mark the date when they play us and they come out fired up, we expect that,” said Dallas. “A football season is a grind, I saw how that worked last year. Nobody has a tougher non-district schedule then we do and we realize that. In non-district, you just want to keep showing improvement each week and you want it to all come together when district starts and then there is the playoffs. Coach T (Thompson) always talks about the three phases of the season. You don’t want to worry about what happens in November or December when it is August. You just have to focus on your next opponent and go from there.”

Dallas feels he has no pressure after advancing to two state title games in his 10th grade year.

“I really don’t feel it that much,” said Dallas. “I’m just going to go out to practice and games and just be myself. After coming so close last year, I still have that taste in my mouth because we were so close and you strive to be a state champion. I am someone that just likes to play the games, bond with my teammates and create some special memories that we will all be proud of down the road. High school is suppose to be fun and we have fun.”