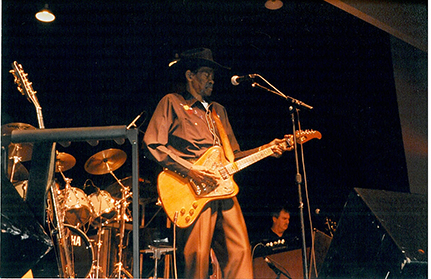 ORANGE — An Orange citizen asked the City of Orange Council to consider renaming the Riverfront Pavilion to The Clarence “Gatemouth” Brown Pavilion.

“We are asking if the subject should arise, please consider renaming it after Gatemouth,” Henry Lowe said. “It would add an international flavor to Orange as he is well known in Europe.”

Lowe said Orange is striving towards becoming a tourist destination and changing the name of the pavilion could help attract more tourists.

“We have the depot and the Confederate memorial park,” Lowe said.

Brown, who died in September 2005, had a music career spanning 57 years. He won a Grammy Award in 1982 for traditional blues for the record, “Alright Again,” and was nominated five more times during his career. He also is an eight-time winner of the W.C. Handy award, now known as the Blues Music Awards. He recorded albums with iconic artists such as Eric Clapton and Roy Clark and influenced countless musicians such as Frank Zappa, Albert Collins and Johnny “Guitar” Watson to name a few.

Brown was known throughout music circles as a talented player. Not only could he play guitar and sing, it was not uncommon for him to play the fiddle, drums, viola, mandolin and even the harmonica.

Although he began his career in rhythm and blues, he expanded his sound and recorded songs in a variety of genres, including country, Cajun, blues and western swing.

Brown was living at his home in Slidell, La. when Hurricane Katrina forced him to evacuate to Orange in August 2005. The storm destroyed his home, which contained his belongings and treasured memorabilia throughout his career.

Already battling cancer and devastated by the loss from the storm, Brown died on Sept. 10, 2005, inside his niece’s apartment in Orange.

He was laid to rest at Hollywood Cemetery in Orange, where a beautiful headstone marks the resting place of the talented musician, according to an article previously published in The Orange Leader.