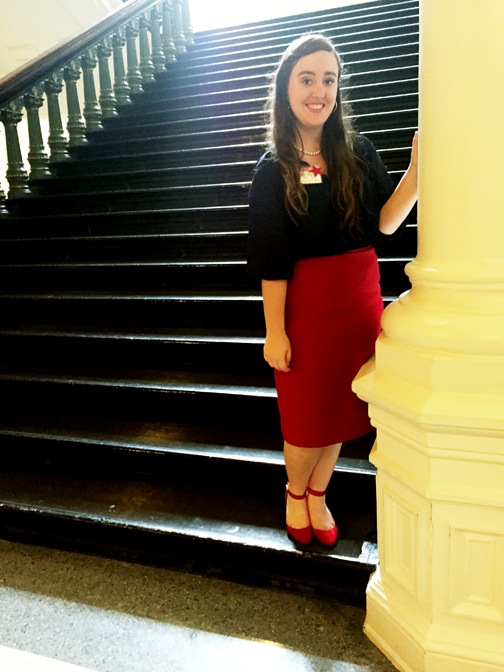 Special to The Leader
The American Legion Auxiliary hosted its 71st Texas Bluebonnet Girls State June 14-20, 2015, at Texas Lutheran University in Seguin, Texas. The purpose of Girls State is to educate young women in the duties, privileges, rights and responsibilities of American citizenship. It is a mythical 51st state where the participants, “citizens,” organize their own city, county and state governments; choose their own officials in accordance with regular election procedures; and learn the duties of the various city, county and state offices. In addition, the citizens introduce and debate their own bills in a mock legislature; establish their own platforms for mock political parties and administer justice by their own law enforcement agencies and court systems.
Girls State citizens are made up of excellent high school students from across the state. Eligibility is limited to any girl in her junior – or third – year of any Texas senior high school whether public, private or parochial. Fundamental qualifications of all nominees are demonstrated accomplishments of leadership, citizenship and character in their schools and community. Past Girls State citizens include former Governor Ann Richards, former Comptroller Carole Keeton Strayhorn, and 128th District Court Judge Courtney Burch-Arkeen.
At Girls State, the young ladies “learn by doing.” On Friday, June 19, all 550 Girls State citizens and 80 staff members traveled to the Texas State Capitol in Austin. The citizens spent over two hours in mock legislative sessions debating bills on the actual floor of the Texas House of Representatives and in the Texas Senate. This year, incoming senior Scarlett Neely represented Orangefield High School and ALA Unit #49 – Orange, Texas.
“Girls State was a once-in-a-lifetime experience that I will forever cherish,” Neely said. “Through the amazing week-long program, I was taught to never feel inferior or helpless when faced with a problem. Problems can only be solved by those who are passionate about them, so it is the passionate ones who must act. In regards to our government, and even world issues, the power truly does lie in the hands of the caring and the compassionate – the people.”
Neely was elected Municipal Attorney, where she was able to create and participate in a mock trial.  “My favorite part about Girls State was definitely the Legislation aspect of it,” Neely said. “Upon my arrival, I was assigned to the Senate, where I was able to debate four bills. (One of which I had the privilege to debate in the actual Senate Chamber in the Capitol!) I also wrote my own bill to be debated, regarding a certain fraction of food stamps assigned per family to be allocated for only fresh fruits and vegetables. (I got to present my bill at the Capitol as well!) Texas Bluebonnet Girls State is an amazing program that allows all of its participants to grow as leaders and learn about Texas Government, all while instilling a large sense of patriotism. I would like to thank the American Legion Auxiliary for providing me with the opportunity to participate in such a fantastic experience.”
For more information on American Legion Auxiliary Texas Bluebonnet Girls State, see http://girls-state.org/ or contact the nearest American Legion Auxiliary Unit in your area.