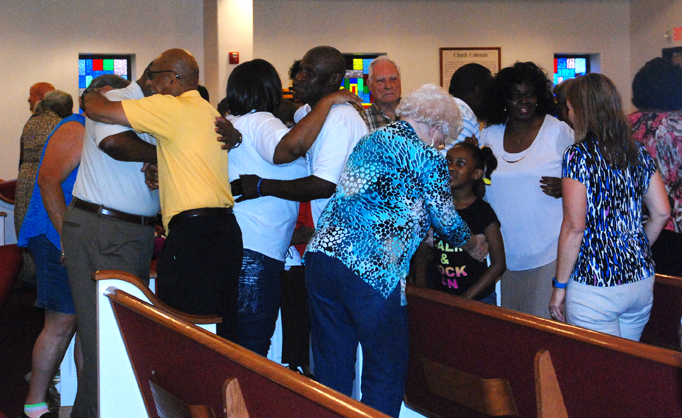 Dawn Burleigh/The Orange Leader Orange residents took a moment to hug one another and say I love you to each other during a prayer vigil held at Mount Calvary Baptist Church, 612 3rd Street in Orange, on Tuesday. The vigil was held for the nine people who were shot and killed during a Bible study session at Emanuel African Methodist Episcopal Church in Charleston, South Carolina.

For one evening, as people gathered together  in church, no one saw the color of skin, just the love for one another.
Approximately 60 people joined together for a prayer vigil held Tuesday at Mount Calvary Baptist Church, 612 3rd Street in Orange.
The vigil was a joining of five churches of different denominations to pray for the families of the nine people who were shot and killed during a Bible study session at Emanuel African Methodist Episcopal Church in Charleston, South Carolina as well as the shooter, Dylann Roof, and his family.
“Roof needs prayer. Certainly the families and the church,” Lead pastor of North Orange Baptist Church Scott McIntosh said. “Someone must pray for him. Think of the turmoil of his family.”
McIntosh also said Orange needs to be the people of peace.
“After all the news events, to see people come together, not to hurt but to pray in Charleston, that is the God who lives in Orange, Texas,” McIntosh said.
When those in attendance were asked to describe unity in Christ, a person said, “Love.”
An unidentified woman said it was all about love.
“Isn’t that why he sent his son?,” she said. “Love is action. Walk in love.”
Reverend K. Ray McDowell of Orange First Church of the Nazarene said he has learned a great deal since he moved to Orange.
“We can talk about love and plan a worship service,” McDowell said. “ But if we do not learn about each other we have not accomplished a thing.”
McDowell said people try to learn about every culture, expect for the black culture.
“I have listened to my brother and learned about what it is like growing up in this country,” McDowell  said in reference to Pastor Demetrius E. Moffett of Orange Church of God.
McDowell also said he did not want to make a difference, he wanted to make it different.
Pastor Franklin Gans said it was time for America to wake up.
“We have to stop playing church,” Gans said. “The most segregated day of the week is Sunday.”
Gans, a retired teacher, said his first year teaching was also the first year of integration in schools.
“America is grieving,” Gans said. “Forgiveness is not for the other person, it is for you.”
T Ray Vincent, of Orange, attended the event with his wife.
“I was here for love and consideration of the people hurting,” Vincent said.
His wife listen to the tragedy and was concerned about the direction of the country.
“We are going backwards,” Cammie Vincent said. “As Christians we need to be as one and come together.”
Sheila Taylor believes Orange is coming together.
“We need to continue to hold onto what we had tonight,” Taylor said. “And not let this be the last time.”