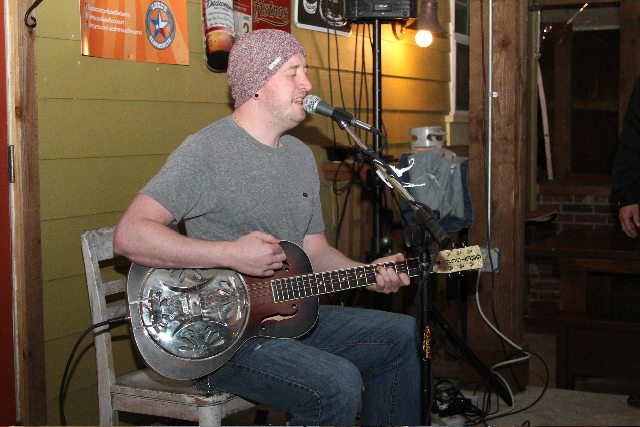 Local musician Blake Sticker is just one of more than 20 artists and bands scheduled to perform at the Fight Cancer Fest 3 event starting at 4 p.m., Saturday, June 20, at The Gig and The Red Room, both of which are located on Crockett Street in downtown Beaumont. Tickets are available at the door. (Tommy Mann Jr. / The Orange Leader)

More than 20 local bands and solo artists of various styles are joining forces to battle cancer during a special event this weekend.

Crockett Street in downtown Beaumont will be the sight of “Fight Cancer Fest 3” which begins at 4 p.m., Saturday, June 20 and will feature as many as 22 bands and solo artists performing inside two venues. There will be alternative rock, heavy metal, and even some rap and hip-hop included.
Artists scheduled to perform include The Left Eye of Horus, Lamantra, Henly, Stacey Bros, Avaris, The Ruxpins, Aurum, Aep, Stuck in Purgatory, Blake Sticker, Necrosis at The Red Room. Meanwhile, inside The Gig, performances will be by Supa, Snorlaxxx, MC Rhetorikk, Etyma, Black Soul, Behelit, The Ron Jeremies, Kamikaze Brigade, Seventh Day Dark, The Bad Parents and John May.
According to event organizer Jesse Brisendine, also the vocalist and guitarist of Behelit, the event began in 2013 when he decided to find a way to assist someone close to his family.
“I have two sons, and the husband of the woman who was my baby-sitter was diagnosed with stage 4 pancreatic cancer,” Brisendine said. “So we quickly put together a benefit festival at a location in Port Arthur. For our second year, we decided to help out a promoter in West Texas, who had a son diagnosed with medulloblastoma, a cancerous brain tumor.”
Although Brisendine could have opted to offer moral support instead, he felt it was important to take action.
“Really, I just sort of ‘felt’ the call to help out,” he added. “We just want to help raise hop to those who need it most. My grandmother had her life-savings wiped out from cancer, so I know how expensive it is and how insurance companies try to pay out the least amount possible.”
In previous years, the proceeds went directly to the beneficiaries with $500 being distributed in 2013 and approximately $1,000 in 2014. Brisendine hopes 2015 will be the biggest and best fundraising event yet.
“This year we decided to go a different route and chose the Gift of Life organization, instead of just a single donor,” said the 26-year-old Brisendine. “They help so many people who are underprivileged, so we thought it was the way to go.”
Brisendine said it was easy enough to recruit volunteers for this event. Instead of limiting it to just one style of music, he drew inspiration from several popular national music festivals.
“Festival like Bonnaroo, Austin City Limits and Coachella are all genre festivals,” he explained. “The result is a wide variety of music fans coming together to have fun. That’s what we want to happen with ‘Fight Cancer Fest.’
“As for the local artists, I’ve met and worked with most of the musicians who have agreed to perform,” Brisendine continued. “They have all been very helpful in getting this off the ground and willing to give of their time. We hope the public will do the same.”