Mustangs stampede Ricebirds; one win away from 4A state title 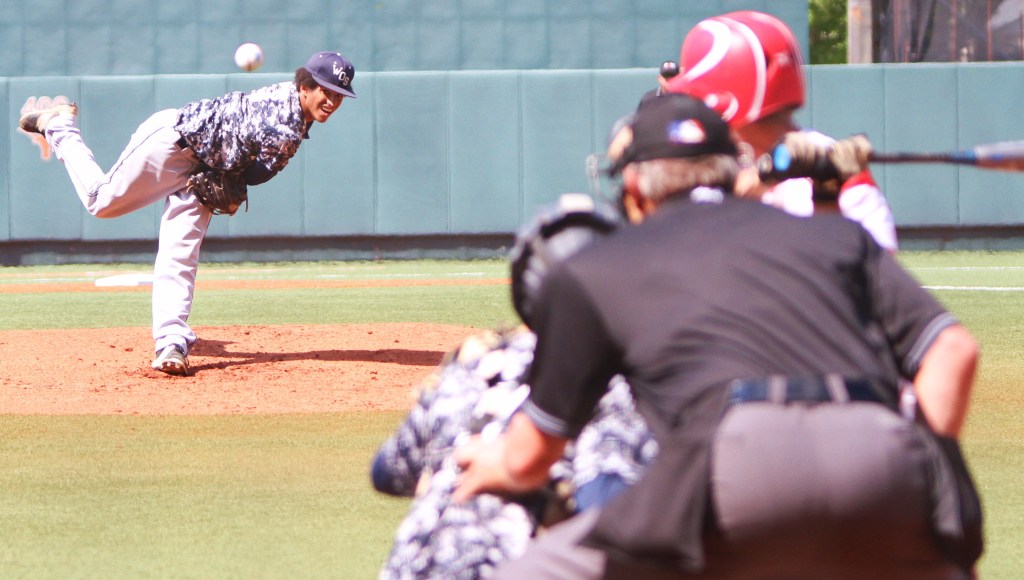 Aidan Anderson threw a one-hitter, along with 11 strikeouts, to lead the Mustangs to a 8-0 victory against El Campo Wednesday afternoon at Disch-Falk Field at the University of Texas in Austin. West Orange-Stark will face Argyle at 6:30 p.m., Thursday, for the Class 4A State Championship. (Tommy Mann Jr. / The Orange Leader)

AUSTIN – Mark it down as the “sweetest” victory in West Orange-Stark Mustang baseball history Wednesday in the Class 4A State Semifinals at The University of Texas’ Disch-Falk Field.
Getting a complete-game, one-hit performance by senior Aidan Anderson and four runs batted in by senior Grant Anderson, the Mustangs bulldozed the El Campo Ricebirds 8-0 in what was a first out, to last out domination.
“The kids came out loose and played almost a flawless game,” said Mustang coach Shea Landry. “They are so battle-tested and now find themselves just one game away from the ultimate prize. I’m so thrilled for them and our school and our fans. They really executed everything we wanted to do today.”
The only thing “sweeter” could come Thursday as the Mustangs (27-10) will battle the Argyle Eagles (29-7) for the 4A State Championship at 6:30 p.m.
“Saw Argyle in the first game and they really swing the bats well,” said Landry. “It should be a heckuva battle. The kids are going to get some good rest tonight and they’ll be ready to battle again tomorrow.”
Aidan Anderson went through the El Campo lineup like “butter.” The Ricebirds were batting .388 as a team coming in but managed just two baserunners during the blowout loss.
Anderson finished with 11 strikeouts. He allowed a single by Tayton Priesmeyer in the third inning and walked Chad Quinn in the fourth and that is all the Ricebirds could salvage.
“Aidan had such great command,” said Landry. “He told me he was going to answer the bell and he did against a super hitting team. He was really relaxed, especially after those first three innings when our defense made great plays behind him.”
“This feels so great,” said Aidan Anderson. “I was able to fill the strike zone up and was hitting my spots well. Grant (Anderson) called a great game behind the plate. Defensively, we made some great defensive plays early on that gave me a lot of confidence and I was able to settle in.”
Grant Anderson had a RBI triple in the fifth inning and capped it with a bases-cleaning three-run triple in the sixth to put icing on the cake.
“Grant did what he has been doing all year and that’s cleaning the bases for us,” said Landry. “His triple was big but that three-run double in the sixth, I felt, put us in total control. He’s been our top batter and RBI man all year and he produced. He and Aidan both. They are seniors and they did what seniors are supposed to do. So proud of those guys.”
WO-S finished with seven hits off El Campo pitching.
The Mustangs jumped on the board in the top of the second inning.
Aidan Anderson led off with a walk off El Campo starter Brylan Crivellari and KJ Miller put down an excellent bunt single. Chase Rutledge followed with a superb sacrifice bunt down the first base line to move both runners into scoring position. Crivellari was able to strike out Ryan Ragsdale. Then he faced Kalen Garrett and with a 1-2 pitch, he threw a wild pitch as courtesy runner Aaron Blagburn was able to dart home and score. Crivellari struck out Garrett on the next pitch.
The Mustangs got the bats going in the top half of the fifth, picking up four hits, two of them for extra bases, to score four runs.

Ragsdale got it going with a single to left, just over shortstop Andrew Saucedo’s head. Kalen Garrett followed with a solid sacrifice bunt as Ragsdale gambled and went all the way to third on the play.  Grant LaPoint-Teate reached after being hit by a Crivellari pitch. Payton Robertson then hit a grounder to second, LaPoint-Teate was forced out at second on the play but the Ricebirds tried to turn a double play at first and the throw went over first base for an error and Ragsdale bolted home to score.
Grant Anderson made it 3-0 in a hurry when he planted a Crivellari offering for a triple to deep rightfield as Robertson cruised in for the run.
Anderson’s triple chased Crivellari out of the game. He worked 4 2/3 innings, allowing three hits. He had two strikeouts but walked two and hit three batters.  Riley Stock took over on the Ricebird hill but he couldn’t stop the bleeding.
Jack Dallas stroked a RBI double to left that brought in courtesy runner Darren Blagburn and Aidan Anderson helped himself when he belted a Stock pitch to right for a RBI single to plate Dallas.
The only downside to the inning was LaPoint-Teate getting hurt sliding into second base. He injured the same leg that he fractured during the football season in which he rushed for more than 1,000 yards.
“The Texas trainer looked at it real well and thinks it is just a deep bruise because there wasn’t any swelling yet,” said Landry. “We’ll evaluate it tonight and tomorrow. It would be a shame if he couldn’t go tomorrow because he’s been such a spark plug for us leading off and his leadership skills. The kids, the staff, we’re all hoping for a quick recovery, we’ll just have to wait and see.”
WO-S had more fun at the plate in the top of the sixth by tallying three more runs. Rutledge and Ragsdale drew leadoff walks and Garrett loaded the bases by reaching on a fielder’s choice. With two outs, Grant Anderson drilled a Stock pitch to deep right for a three-run, standup double.
In the top of the third, Payton Robertson drew a one-out walk and Grant Anderson was nailed by a pitch but Crivellari got out of it when Dallas hit into a double play that was handled by the shortstop.
In the bottom of the third, the Ricebirds got their first hit when Priesmeyer singled to right with two outs but Anderson fanned Crivellari for the third out.
In the bottom of the fourth, Anderson walked leadoff batter Quinn but got out of it in a hurry. Clayton Harp hit into a fielder’s choice, forcing Quinn out at second and Anderson sent Blaine Fuechec and Stock back to the dugout on consecutive strikeouts.
Rutledge made a great play for the Mustangs in rightfield in the second inning, making a diving catch of a fly ball hit by Blaine Fuechec.
In the other semifinal, Argyle erased a 3-2 deficit in the top of the fifth inning to defeat Abilene Wylie (28-6) 9-4.
Argyle had 11 hits while Wylie had four.
Argyle shortstop Tanner Boyzuick was 3-for-4. Pitcher Rixey Boyd got the win on the hill. He went the distance, allowing 10 hits while fanning four and walking one. He was 2-for-4 at the plate with three RBI and a double.